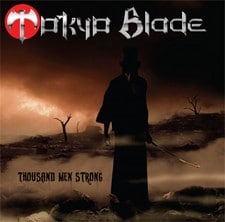 Lead guitarist and founder member Andy Boulton said: “We’re viewing ‘Thousand Men Strong’ as our third album, or rather the album that should have been, so to speak. It’s the natural follow-up to 1984’s ‘Night Of The Blade’ as all the songs hark back to the glory days of NWOBHM. We deliberately recorded the whole thing in a very live manner and in about a week, just like a lot of albums were recorded back in the early ’80s. No keyboards, no bullshit — just 100% heavy metal.”

The new album ‘Thousand Men Strong’ is going to thrill the fans from the early days as well as younger people who love their Metal powerful, melodic and above all HEAVY!

This summer, Tokyo Blade will perform at some of the most important European festivals. New Wave Of British Heavy Metal is as strong as ever before and as the name suggests a ‘Thousand men strong’ will take a lot to be beat.