Cinderella frontman Tom Keifer announced yesterday via Facebook that he was unfortunately going to have to cancel three upcoming gigs due to suffering from “severe vocal strain.”

This comes just after Keifer had shared an interview that he did with Pat Bywater of Goerie where he discussed beating possible career ending vocal chord problems.

Two of the three cancelled gigs are Keifer‘s appearances at Rock Fest in Cadott, Wisconsin on July 14th and Roar On The Shore in Erie, Pennsylvania on July 15th.

Sleaze Roxx wishes Keifer a speedy recovery. Keifer‘s Facebook post in regard to his cancelled gigs can be seen below. 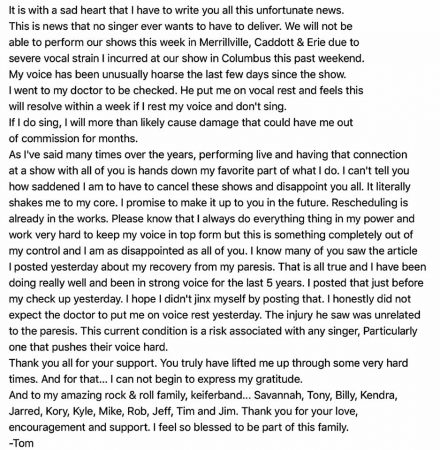