Tom Keifer dishes out high praise to his #keiferband bandmates

Former Cinderella frontman Tom Keifer was recently interviewed by Jim Barber for Music Life Magazine and the singer was asked about his bandmates that played a big role in the creation of his latest studio album Rise. 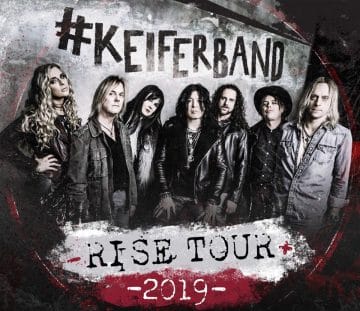 “We’ll start with my wife Savannah, who sings in the live shows, plays percussion and piano. She and I co-write together pretty much all my solo stuff, and she is also involved in the production and brings so much to the table. That’s kind of the way it started because we created the first record together, using session players. That’s where the partnership began in terms of this band, it was in creating The Way Life Goes [initially released in 2013, and re-released in 2017], together. And then we’ve got Tony Higbee on guitar, who is also an amazing singer. He’s such a high energy performer, just a true rock and roll guitarist. He’s got that edge to his playing; it’s real nasty, he has a great tone and is very creative in the studio. He and I work very well together on the guitar work and shared the solo responsibilities on Rise. I think it’s about 50/50 between us in terms of lead playing…

We’ve got Billy Mercer on bass, who is just an amazing player. He is so deep seated in the roots of rock and roll and what inspired that. He is really well versed in the Motown stuff and that sort of movement on the bass that’s just so great in rock and roll. Kory Myers on keyboards is also a killer singer and is amazing on the Hammond B3. He is also very steeped in the roots, like on the song “Waiting On The Demons”, which has a real Gospel feel to it, and did an incredible job with his piano playing. Kendra Chantelle does background vocals and percussion live and in the studio and she also co-wrote the lead-off track “Touching The Divine” with Savannah and I, so she is a great songwriter and brings a lot to the stage vocally and with her stage presence. With the vocals on Rise, we’ve got six singers in the band and we work together kind of stacking some unique blends of vocals on the record that I think are really cool, and Kendra’s voice is a big part of that.

Jared Pope is just the most amazing drummer that I have ever played with. He’s got a swing and a groove to him; he’s very much a rock and roll drummer. He knows how to create and maintain that pocket but also kind of be very old school and traditional at the same time. His snare hand is traditional grip, which you don’t see a lot of in rock. He delivers. They are all just incredible musicians and singers but also incredible people. The most important thing on top of all that is how we call get along. It makes it very easy to work together when we’re on the road, or in the studio.”

You can read the rest of the article / interview with Tom Keifer at Music Life Magazine‘s website.

Sleaze Roxx stated the following in its review of Rise: “When I saw #Keiferband, which appears on the album art more so than the words “Tom Keifer” (which makes you wonder if the band name is in fact Keiferband), I was surprised at how much harder edged the songs were than I expected. I remarked that with a band this loud, Tom does not need the rest of Cinderella. After a few spins through the new album titled Rise, I say again, he doesn’t need Cinderella.”