Former Cinderella frontman Tom Keifer has released a lyric video for his song “Waiting On The Demons” from his second solo album Rise, which was released back in mid-September 2019. 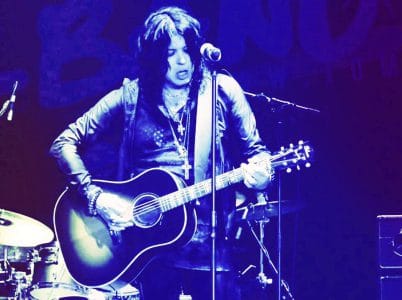 “Demons come in many forms and are different for everybody,” Keifer explains. “Young or old, we all face them at some point in life. They are the things that can take hold of our lives and prevent us from reaching our full potential and happiness. We as humans, have a tendency to put off or wait to take that first step toward healing. ‘Waiting On The Demons,’ simply stated, is a song about taking that step. Life is far too precious of a gift to wait. Be it addiction, depression, abuse, mental illness, grief… We hope that the ‘Waiting On The Demons’ video will inspire and empower anyone struggling in the dark to find the strength within to overcome. It’s also a reminder that if you can’t find the strength within yourself, there are many organizations and people in the world who can and want to help.”

“Waiting On The Demons” was written by Tom Keifer and Savannah Keifer, and the video was produced and edited by Joshua J Smith.”

Sleaze Roxx stated the following in its review of Rise: “So, this album hits on a lot of levels. For one, it is Tom sounding like Cinderella with hard, sometimes even heavy metal sounding songs. It does have its fair share of ballads and, for me, they’re hit and miss. But, if you are buying it for the rocking tracks, there is a lot to pick from here. If you’re buying for the softer, songwriter style songs that have always appeared in Cinderella and Tom Keifer releases, that is here too. For me, I’m more for the former. I wanted to hear if he could still write an ass kicking song and if the band of Nashville musicians can deliver a heavy rock record, heavier than The Way Life Goes. They have.

It is such an incredible release. It almost makes me sad, in a way, that we were cut so short on Cinderella albums and that it took so long to get Tom Keifer out and doing new music again. The Way Life Goes was a great album that had occasional flashes of excellence and occasional reminders of Cinderella. This album, Rise, is much closer, I would say, to a Cinderella album that would fit best right after Still Climbing. It isn’t Cinderella. It has Tom‘s solo fingerprints all over it. But, if you have wanted to hear more stuff that sounds like Cinderella, this is about as close as you’re going to get.”