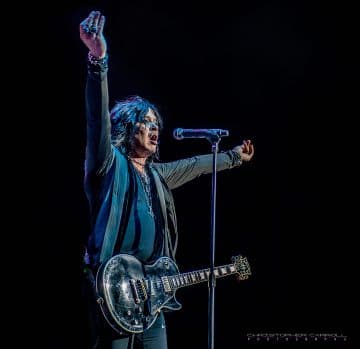 Cinderella frontman Tom Keifer was recently interviewed by Andrew Catania for All That Shreds on the occasion of his new studio album Rise, which was released via Cleopatra Records on September 13, 2019.

Keifer was asked whether he would consider playing a Cinderella album in its entirety as many other bands of that era have lately been doing to which he replied: “No, I don’t think so. I think at this point I’ve started a new band and it’s a hybrid between the music I’ve been involved in and created in the past and two new records now that we’re playing. It’s a whole different band, and this is the path that I’m on, and it wouldn’t make sense to do that with my new band.”

In regard to how long that the album Rise took to write, Keifer advised: “That’s an interesting question because ideas for songs I collected along the way over some time. They were new songs when this band started touring back in 2013, and I’ve been stashing away song ideas, lyrics, and titles for the last six years. We’ve been on the road, and when we got off the tour last year and finished up our dates, we decided it was time to make a record. It just felt like the time is right and the band’s chemistry had grown at that point.”

You can read the rest of the interview with Tom Keifer at All That Shreds‘ website.