Slovenian hard rockers TomCat have released an album teaser for their new upcoming album that will apparently be entitled Something’s Coming On Wrong. 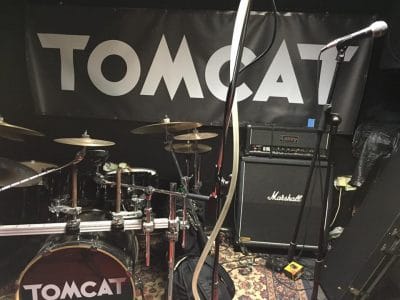 “TomCat was formed by ex-members of Glenn Moore, Strock and Cyclone in autumn 2010. The beginning of their story is quite typical — playing local shows and suffering many line-up changes. Through all this turmoil, TomCat managed to solidify the band with Denis Jambrosic (vocals), Rok Barle (guitar), Gregor Sujica (bass) and Ziga Ravselj (drums) and began writing material for their debut album. When it came to the recording of ‘Bits N’ Pieces‘, TomCat chose to work with people their own age. The album was recorded, mixed and mastered in Safe & Sound Studio by Beny Kic and Matej Susnik (both members of Metalsteel, Sabbath Judas Sabbath).

TomCat walk on the thin line between classic hard rock and ’70s heavy metal, and at the same they are not hiding the fact they are influenced by big names of the ’80s. Apart from that, TomCat showcases sophisticated musical expression, fueled by youthful energy, sincerity, creativity and unbridled life will.

This quarted really don’t need hairspray, fancy clothes or glamourous stage names — just jeans and leather. On ‘Bits N’ Pieces‘, they won’t bother you with philosophy or teach you how to live, just tell you ten stories about life around them. Actually, about life all around us. Relax, it’s only rock ‘n’ roll and they believe you will like it!

Tomcat had changed its line-up entirely in december 2014 and is working on a sophmore album which is to be released in 2016, featuring a new sound and new look of the band.”

You can listen to TomCat‘s last album Bits N’ Pieces, which was released in 2013, via the group’s Bandcamp page.