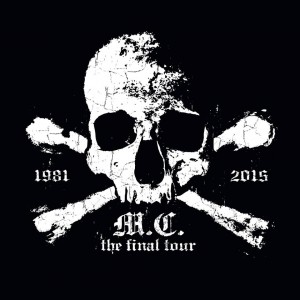 The sleaze rockers’ last show did not go over without a hitch as drummer Tommy Lee got stuck way up in the air when his Crüecifly roller coaster / drum ride got stuck leaving Lee upside down and forcing his road crew to have to climb up to get him (see around 4:53 mark of the video below when Lee stops playing his drum solo). Lee took it in stride joking with and chatting with the sold out crowd while his road crew worked to get him out. Eventually, Mötley Crüe‘s road crew got the drum kit to rotate and lower a little bit before Lee had to climb out and down part of one of the side railings to safety.

During Tommy Lee’s drum solo on the final show ever of Motley Crue at Staple’s Center in Los Angeles 12/31/15, his Cruecifly rollercoaster drum set breaks do…

Motley Crue performs Wild Side at their last show ever at Staples Center in Los Angeles on New Years Eve.