The “feud” between Mötley Crüe drummer Tommy Lee and his son Brandon continues as the drummer bucked the seemingly usual Father’s Day tradition of heaping praise to your family by criticizing his boys via Instagram (see message below) for not having certain morals and being “assholes” at time .

Lee‘s son Brandon did not waste any time retaliating via Instagram (see message below) by accusing his father of being an absentee father too many times during his childhood.

Back in early March 2017, Lee and his son Brandon reportedly got into a physical altercation which involved a 911 call and the police getting involved.

Wikipedia states the following in part about Lee‘s marriage and divorce from Pamela Anderson and their two children Brandon and Dylan (with slight edits): “On February 19, 1995, just four days after they met, Lee married actress and Playboy Playmate Pamela Anderson. They have two sons together: Brandon Thomas (born June 5, 1996) and Dylan Jagger (born December 29, 1997). The couple divorced in 1998. Although divorced, the couple reunited briefly upon Lee‘s release from jail but eventually split again in 2001. In 2008, it was announced that Lee and Anderson were back together and living with each other and their children, but split for good soon after.” 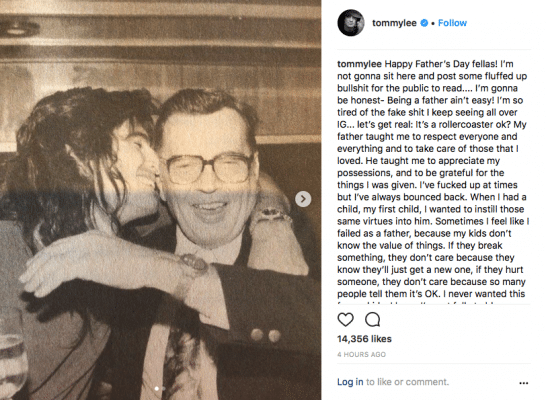 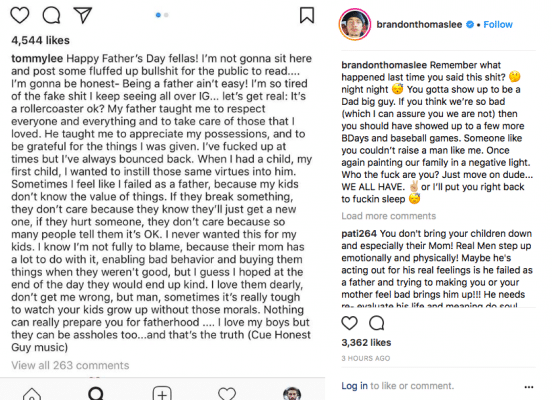