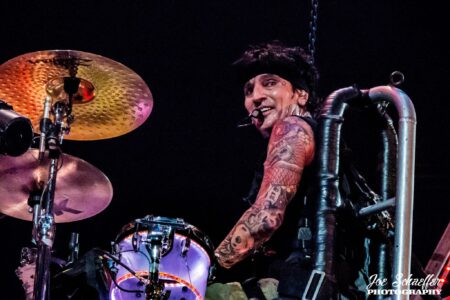 It wouldn’t be Mötley Crüe without some opening night mishaps. The Stadium Tour‘s opening night was finally taking place at Truist Park in Atlanta, Georgia, USA on June 16, 2022 but unfortunately, Mötley Crüe drummer Tommy Lee was unable to complete his band’s set due to some broken ribs. Back in July 2015, Mötley Crüe also experienced some miscues during their opening night of their All Bad Things Must Come To An End Tour in Grand Rapids, Michigan, USA when the group had to stop its show for at least ten minutes on two different occasions.

Lee eventually went to address the crowd in Atlanta, Georgia, USA to explain his situation.

Mötley Crüe later tweeted part of what Lee stated to the crowd:

“Man ya’ll ain’t gonna believe this shit!.…I broke 4 fucking ribs! But I’ve been resting and healing and even though the doctor tells me I shouldn’t play at all, you know I’m stubborn and I’ll beast through the pain every show for as many songs as I can! And have no fear, my boy Tommy Clufetos is here to help me out until I’m back at 100% we’ve all been waiting years for this moment and there’s no way l’m missing this! On with the show! 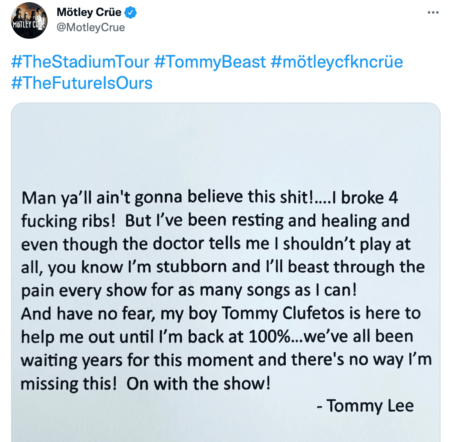