Mötley Crüe drummer Tommy Lee continues to make his “feud” with his son Brandon public as the drummer has posted some of the financial costs that he has apparently incurred in parenting his son.

The “feud” between father and son seemed to escalate back in early March 2018 when Lee and his son Brandon reportedly got into a physical altercation which involved a 911 call and the police getting involved.

For Father’s Day on June 17, 2018, Lee posted a message on Instagram effectively complaining how his sons had turned out and that they were “assholes” at times.

Lee‘s son Brandon did not waste any time complaining that his father had not been there for him during his childhood and the young adult posted a video of his father seemingly passed out after their physical altercation back in March 2018. The video was later

Lee retaliated with a message on Instagram on Monday, June 18, 2018 outlining some of the financial costs that he has apparently incurred while parenting his son Brandon. 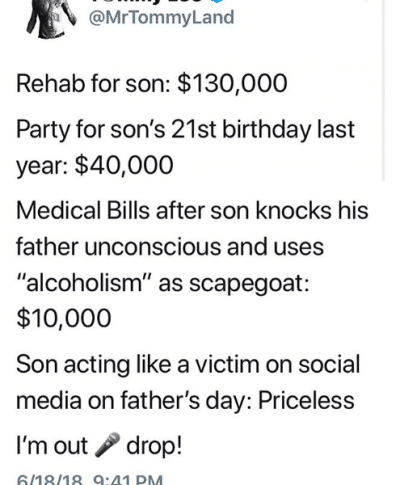