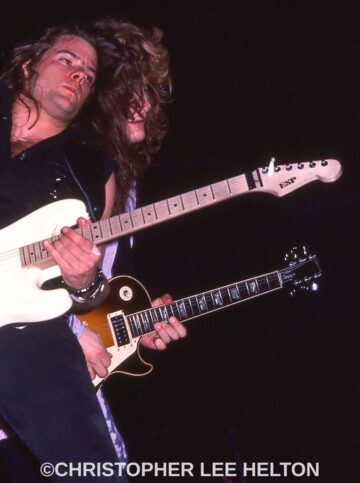 In terms of how he views his time in Tesla, Skeoch indicated: “I think they’re fantastic. I think they’re wonderful. I mean, it was a really great ride. I mean, it was great up until about, I guess until the last record I did with them. After that, it just seemed like they started… I left, but they started just kind of regurgitating a lot of the same songs, either live or just different forms of a lot of the same songs. Not that they didn’t make records or whatever, but I think the records I did with them stand the test of time. And I think they’re the best records. I think they’ve actually suffered a little bit since I’ve been gone. I think you can hear it in their songwriting and in the sound of the records. Not that I’m all great. I think you take any one element out of a band, and I think it affects it. But I didn’t realize how much of a big part of the sound I was adding until after I left and friends would send me a song and I’d go, “Wow, man. They really… It’s not the same energy at all”.”

Dean asked Skeoch whether the success of Tesla‘s first album Mechanical Resonance, which occurred when the guitarist was quite young, essentially contributed to his drug issues. Skeoch replied: “No. No, I don’t think so. As far as my issues and stuff, I have always been number one: I mean, I’ll say this. I have two autistic children and I see myself in them so much now, and I believe I’ve had some issues just my whole life, of course, with stuff. So, I don’t attribute the quick success of Tesla having to do with me becoming a drug addict or any of that kind of stuff. It was going to happen one way or the other. But I do think that some of that drug addiction stuff and some of the problems I had stemmed from where Tesla was going, though, towards the end of my time with it. I wasn’t happy with it, and I was doing a lot of drugs because of it.”

On whether he is still in touch with any of his former Tesla bandmates, Skeoch revealed: “Not really. Jeff would call me every now and then, and I spoke to Troy a couple of times. I saw Troy, he came over and had dinner one night when they were around where I live here in Florida. But there’s something going on where one of the guys… Ever since I left the band, I mean, every interview I did for the first year or two, all every interviewer I’d get on with goes, “Oh, well that Brian guy had a lot of not nice things to say about you”. And this was right after I left. When I left, I totally was like, “Peace, you guys. You want me to go? I’ll go”. I didn’t give them any shit about it. I was willing to do it and I was glad… I don’t know. I wouldn’t say glad to do it, but it was that type of thing. Then all these interviews I heard him talking shit about me or that he was, and then I started doing things accordingly. Never saying anything in interviews or anything, but in songs, I would reference things. Now, he’s going around saying I say all these things that I’ve never said, and it’s just a shit show really. It’s silly stuff too, and the thing is, I don’t believe anyone, maybe three people care. You know? I don’t know. It’s pretty silly.”

You can read the rest of the interview with Tommy Skeoch by media journalist Mark Dean at Antihero Magazine‘s website.