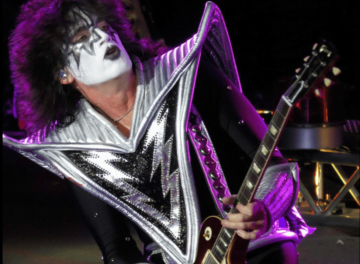 KISS guitarist Tommy Thayer was recently interviewed by Stefan Nilsson for Roppongi Rocks. KISS recently played a number of dates throughout Japan as part of its End of The Road World Tour. Thayer has been the lead guitarist for KISS since 2002 replacing Ace Frehley. Since early 2004, the group’s line-up consists of Thayer on lead guitar, Paul Stanley on lead vocals and rhythm guitar, Gene Simmons on lead vocals and bass, and Eric Singer on drums (the latter who ended up replacing Peter Criss). 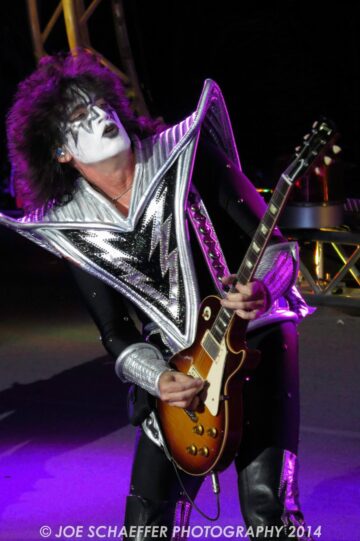 Nilsson asked whether Thayer ever thought that he would end up as the longest serving lead guitarist in KISS when back in the 1980s, his band Black ‘N Blue opened for KISS. Thayer replied:

“I know. In 1985, we opened for KISS on the ‘Asylum’ tour. We did about 24-25 dates in the US, as you know. I think at the time we were just such huge KISS fans we couldn’t believe we actually got this spot on the KISS tour. That was a dream come true, one of those ‘Pinch me, I can’t believe it’ things. We were so excited. We went out and did those shows and we got the opportunity to meet those guys, obviously. Gene first because he’s more outgoing and chatting us up backstage or at the soundcheck, the first couple of shows. Then I got to know Paul a little bit later because he is a little less approachable at the beginning. Certainly, I have known both of them a long time. And then Eric Carr and Bruce Kulick at the time. I never aspired, honestly, to be in KISS or thought that would even be a possibility. I really didn’t. Even when I started working for them behind the scenes before the Convention tour started and I started on KISStory. This is like ’94…’93-’94. I never aspired to be the guitar player of the band. I was really into pursuing the business side of music, production and management.”

In terms of how we went from working for KISS on the business side to being the band’s lead guitarist, Thayer indicated: “There’s a lot of things that happened during that period of time. I got involved with those guys working in the KISS organisation probably in ‘93. ’94. That didn’t happen – needing a guitar player – really officially until 2003. That’s eight or nine years at least. I started to work for them and because I am a guitar player and because they knew that I could play guitar, I got involved with doing demos with them, writing songs – this is after Black ‘N Blue. There was a lot of guitar-type stuff I was doing in the meantime. Even when they did the reunion, I was working with Ace and Peter. I was rehearsing with those guys. Ace didn’t show up or something…

Gosh! Even recording ‘Psycho Circus’, which was hush-hush, to begin with, I did almost all the guitars on that album as you know. Haha! I am not telling you anything you didn’t know. For the record! So, there were all kinds of things I was doing guitar-wise as part of everything else I was doing at the time. As those tours continued, like the ‘Farewell’ tour of 2000, I actually had an outfit ready in the cases – I’m sure you’ve heard this too, but for the record – and boots and all this sort of things, as an insurance policy really because there was a lot of uncertainty with Ace. I was there and they knew that I could do it because they knew my guitar chops and skills over the years. That’s how it came to be and people say: ‘Oh, did you have to audition?’ and that sort of thing. No, it was just a natural transition over the course of several years really that led to it.””

You can read the rest of the interview with Tommy Thayer via Roppongi Rocks‘ website.