KISS guitarist Tommy Thayer was recently interviewed by Scotland’s The Herald and he was asked about a possible new KISS studio album. 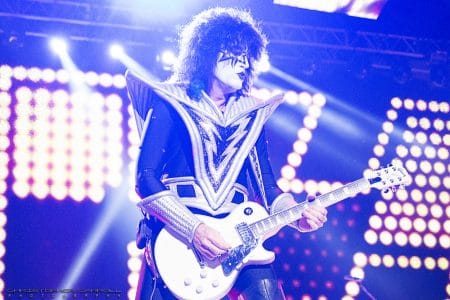 Thayer stated: “A new album is possible… I think everyone in the band would love to do that, because we still want to write music and to record songs. But the record business has taken a nosedive and you have to be careful these days, because something like a new album can be a failure… I know fans might like to see a new record, but you don’t want to be perceived as failures within the industry. With everything we do we want to be a success.”

In terms of the difficulties encountered even by long-standing bands such as KISS, Thayer stated: “I’m not sure Kiss would survive if they arrived now… It’s hard enough to sustain a career even with a band as legendary as Kiss, so for a new group to come along and get noticed, it seems almost impossible. The business side is so non-supportive. You have to go out and play all the time just to get noticed, and the other problem is that the genre of rock ’n’ roll has been done almost every way over the last 50 years. I don’t know how you can reinvent a genre of rock ’n’ roll in a way that hasn’t been done already.”

You can read the rest of the interview with Thayer at Scotland’s The Herald.