KISS lead guitarist Tommy Thayer was recently interviewed by Argus Leader in advance of the group’s End of the Road World Tour stop at the Denny Sanford Premier Center in Sioux Falls, South Dakota, USA on March 6th and spoke about replacing Ace Frehley in the band. 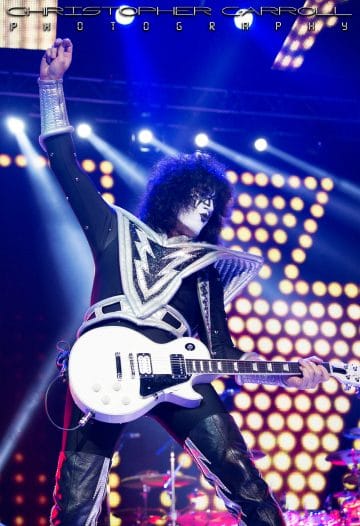 Thayer admitted: “I have to be honest, when I first came into the band, there was some pressure.” He continued: “It was kind of a no-win situation when you’re replacing somebody like that. There’s a lot of fans who are unhappy with this and I understand. They followed the band for a long time and it’s hard to see things like that change sometimes. After a few years went by, I got more confident and more comfortable in the situation, as time goes on it continues to be a growing experience and something that I get more used to.”

Wikipedia states the following about Thayer‘s history with KISS (with slight edits):

“In 1994, Kiss‘ Gene Simmons and Paul Stanley hired Thayer to work part-time on their forthcoming book Kisstory, which led to other projects and eventually a full-time role with Kiss. Thayer‘s work for Stanley and Simmons began by performing such tasks as painting Stanley‘s house and cleaning out Simmons‘ gutters.

Thayer managed the 1995 Worldwide Kiss Convention tour and the Kiss MTV Unplugged concert. In preparation for 1996’s Kiss Alive/Worldwide Tour, Thayer worked with guitarist Ace Frehley and drummer Peter Criss, to help them relearn their original guitar and drum parts from the 1970s. Thayer worked as producer and editor of Kiss‘ long form video and film releases including: Kiss, The Second Coming in 1998, New Line Cinema‘s feature Detroit Rock City in 1998, and Showtime Television‘s pay-per-view, The Last Kiss in 2000.

By 2002 and with the growing uncertainty of Ace Frehley‘s involvement in the band, Thayer stood by for a Kiss performance at the 2002 Winter Olympics Closing Ceremony in Salt Lake City to fill-in on lead guitar if necessary. One month later, Thayer got the call and donned the Spaceman makeup for the first time, filling in and performing onstage with Kiss at a private concert in Trelawny, Jamaica. Several TV appearances followed in 2002 including ABC‘s Dick Clark’s American Bandstand 50th Anniversary Show and That 70s Show on Fox.”

You can read the rest of the article / interview with Tommy Thayer at Argus Leader‘s website.