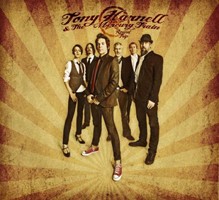 Tony Harnell & The Mercury Train Take A ‘Round Trip’ In July

Frontiers Records will release on July 2nd in Europe and July 27th in the USA “Round Trip”, the debut album from Tony Harnell & The Mercury Train. This is a very special record: a stripped down, reinvented retrospective of Tony Harnell’s past classics originally recorded with his previous bands TNT, Westworld and Starbreaker, with one brand new song “Anywhere But Here” recorded especially for this release.

The idea of re-recording some repertoire classics came about after Tony performed some low key shows in New York in late 2008, with some talented and accomplished musicians that were not part of the Metal/Hard Rock scene. The desire was to breathe new life into the songs with new arrangements, key changes and added parts, it’s like listening to songs you know in a whole new way.

Frontiers Records President, Serafino Perugino liked the concept and in Harnell’s own words “The idea was originally based on it being the usual cliche “acoustic” album. Well, for us hard rockers that usually means simply playing the songs pretty much as they were but with acoustic guitars. That’s not exactly what I had in mind. If I was going to do this I was going to have some fun. I wanted to strip things down and see what would happen when musicians outside the hard rock community played my songs. That intrigued me. So, I gave all the guys the original album versions and then pretty much gave them carte blanche to reinterpret the songs. That meant key changes (cause you can’t sing like a banshee when you strip things down, sounds silly), chord changes and even arrangement changes if the mood hit. I also wanted a semi-live vibe. What we ended up with is an album that honors the original songs with a little added spice, color, and above all…fun”.

At the end of 2008 Tony and the other musicians entered the studio for a marathon two-day recording session that was supposed to lead into a whirlwind mixing session and an immediate release. But immediately after the session Tony hit some rather intense personal bumps in the road and production stopped. Months later the album was quickly completed.

“Recording this album was an extremely cathartic experience, allowing me to gently close the door to the past with love and gratitude and regain the pride I rightly deserve to have for these songs and for the years of my life I gave to the various periods when they were written” continues Tony. “This is in no way meant to erase, dismiss or compete with the incredible original recordings of these songs. This is just a little fun reinvention, a way to leave the past behind on my own terms. These are your songs as much as they are mine, some of you, like me, have all kinds of memories attached to them. My lyrics were, are and always will be filled with my experiences, struggles, hopes and dreams and my observations of the world around me. Hopefully you’ll listen to these songs in a new way and hear them with new ears. I know I have”.

“Round Trip” final tracklisting includes:
Somebody Told You; Intuition; Month Of Sundays; Lonely Nights; Shame; Northern Lights; Down To The River To Pray; Satellite; 10K Lovers; Uninvited; Ready To Fly; When I’m Away*; Song For Dianne; Anywhere But Here.* Bonus track