Former TNT and Skid Row lead vocalist Tony Harnell is adamant about moving forward and apparently not discussing certain aspects of his music career that occurred in the past. 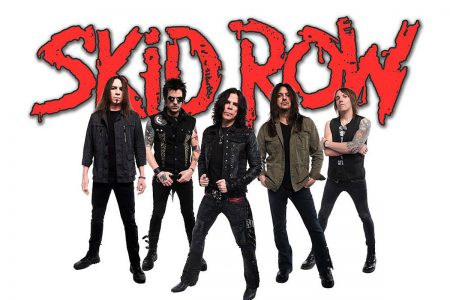 Harnell has made a lot of changes in his life and accomplished quite a bit during the last five years including a stint with Skid Row as lead vocalist from April to December 2015, rejoining and then leaving TNT for the third time in October 2017, releasing a third Starbreaker album in January 2019, releasing a new album with Lovekillers feat. Tony Harnell in December 2019, celebrating almost two years of sobriety in late December 2019, and unveiling a new single with his project EchoBats, which also features guitarist Joel Hoekstra (Whitesnake, Trans-Siberian Orchestra), keyboardist Eric Levy (Night Ranger), drummer Matt Starr (Mr. Big, ex-Ace Frehley, Faithsedge, Black Swan) and bassist James Lomenzo (ex-White Lion, ex-Megadeth).

Harnell was recently interviewed by media journalist Mark Dean for Madness To Creation with the focus of the interview to a large extent on Harnell‘s new project EchoBats, which recently released a Beatles-esque debut single titled “Save Me From Loving You.”

“Having had a music career that’s spanned for 40 years, over 20+ studio albums, being a Hall of Fame inductee and currently promoting a brand new single, I cannot believe that my short 9 month stint in Skid Row is still a talking point 5 years on!

We are currently in the middle of a crisis where we should all be supporting each other and my statement being used as click bait doesn’t help! I’ve worked really hard over the past few years to rebuild and better myself. It’s never easy going toe to toe with your demons and everyone makes mistakes. Joining that band wasn’t the right decision for me and it certainly wasn’t the right time for me either.

From here on in, I will no longer be discussing it as I want to focus on the future and be positive moving forward.

In the meantime, stay safe everyone and don’t forget to check out Echobats 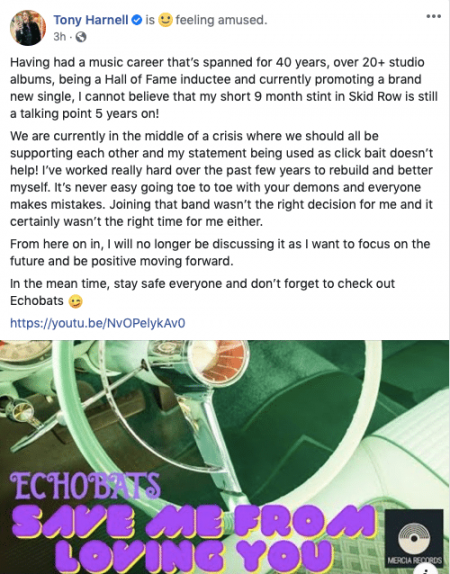