Back in 1968, Tony Iommi chose to leave Jethro Tull to rejoin Earth which would eventually be renamed as Black Sabbath. Whilst this seems like a good decision in hindsight, at the time, it wasn’t seen as such a positive move for his career. Speaking on the Backstaged: The Devil in Metal podcast, the British artist said “I didn’t want to be the guitar player in Jethro Tull and like a side musician. I wanted to be a part of a team. So I said to Geezer, ‘Let’s get the band back together,’ which is what we did. We called Ozzy and Bill from London, and we said, ‘We’re coming back. If everybody’s really serious about this, I’m willing to leave and we’ll get back together again and really work at it.’ So that’s what we did.” 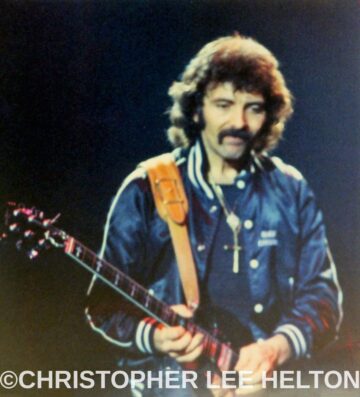 Wikipedia provides the following details about Iommi‘s stint with Jethro Tull (with slight edits): “In December 1968, Iommi abruptly left Earth to join Jethro Tull. Although his stint with the band would be short-lived, Iommi made an appearance with Jethro Tull on The Rolling Stones Rock and Roll Circus TV show. Unsatisfied with the direction of Jethro Tull, Iommi returned to Earth by the end of the month. “It just wasn’t right, so I left”, Iommi said. “At first I thought Tull were great, but I didn’t much go for having a leader in the band, which was Ian Anderson‘s way. When I came back from Tull, I came back with a new attitude altogether. They taught me that to get on, you got to work for it.”

While playing shows in England in 1969, the band discovered they were being mistaken for another English group named Earth. They decided to change their name again. A cinema across the street from the band’s rehearsal room was showing the 1963 horror film Black Sabbath starring Boris Karloff and directed by Mario Bava. While watching people line up to see the film, Butler noted that it was “strange that people spend so much money to see scary movies”. Following that, Osbourne and Butler wrote the lyrics for a song called “Black Sabbath”, which was inspired by the work of horror and adventure-story writer Dennis Wheatley, along with a vision that Butler had of a black silhouetted figure standing at the foot of his bed. Making use of the musical tritone, also known as “the Devil’s Interval”, the song’s ominous sound and dark lyrics pushed the band in a darker direction, a stark contrast to the popular music of the late 1960s, which was dominated by flower power, folk music, and hippie culture. Judas Priest frontman Rob Halford has called the track “probably the most evil song ever written”. Inspired by the new sound, the band changed their name to Black Sabbath in August 1969, and made the decision to focus on writing similar material, in an attempt to create the musical equivalent of horror films.”

This move seemed to pay off though, as Black Sabbath went on to be one of rock’s biggest groups ever. That’s no disrespect to Jethro Tull either who proved that flute-playing could also be cool and sold over 60 million records themselves. Nonetheless, the global appeal of Black Sabbath was undeniable and helped Iommi turn into a rock god, amongst the likes of Ozzy Osbourne and Ronnie James Dio. This led to Iommi being voted as RollingStone Magazine‘s 25th greatest guitarist of all time.

With this said, it makes you wonder what would have happened if Iommi had stayed with Jethro Tull. Would they be more successful or would his role of a ‘side musician’ have made little impact on the band’s success?