Sleaze Roxx readers may be familiar with Tora Tora who released two albums (Surprise Attack in 1989 and Wild America in 1992) before disbanding prior to releasing their third album. Eventually, Tora Tora released their third album via FnA Records which was entitled Revolution Day. FnA Records also ended up releasing a number of other rare and unreleased demos from Tora Tora from back in the day including Before & After. 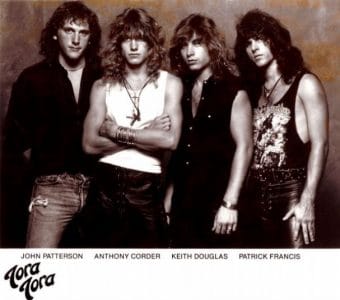 Former Sleaze Roxx writer and current XSRock editor Bobby Caughron interviewed Tora Tora guitarist Keith Douglas who commented on the material released through FnA Records, the possibility of new material from Tora Tora as well as the name of two big name bands that opened for Tora Tora back in the day:

“With FNA we literally dug up everything we could find that we’d ever recorded. We had a production deal with Ardent Studio in Memphis so we could basically use a studio there whenever we wanted to so we recorded a LOT of songs. The quality ranges from really great studio to really horrible cassette recorder but we just thought why not you know? FNA offers up some pretty unique stuff for the die hard fans. We have kicked around a few new ideas from time to time and even discussed working on a new record but nothing has really come of it yet. If and when we do, it would be 100% for the fun and enjoyment of it rather than worrying about any commercial success.”

“Everyone we ever toured with were pretty great to us. Bands who used to travel with us as openers for us on club tours were always the most interesting. A couple of our club openers you may heard of were Alice In Chains and The Black Crowes, wonder what ever happened to those guys? Lol. Probably our favorite as an opener on bigger tours was with LA Guns and Dangerous Toys. We crossed the country a couple of times with those guys and had a ball. Also, doing arenas as an opener for The Cult on their Sonic Temple tour was a big highlight for us. As far as any other bands being jerks, we are pretty easy going guys so if a band or two took themselves a little too seriously along the way, we probably didn’t notice.”

You can read the rest of the interview with Tora Tora‘s Keith Douglas at XSRock.