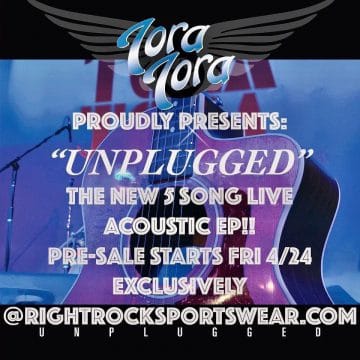 As first reported by Sleaze Roxx earlier this month, Tora Tora will be releasing a new album consisting of previously recorded and sometimes never played tracks.

“You wanted NEW Tora, you’ve got it! In June of 2019, the band played & recorded its first EVER Unplugged show here in Memphis and now it will be released JUST FOR YOU. Pre-sale of limited edition vinyl and CDs + tees starts this Friday (4/24) at rightrocksportswear.com – keep it plugged in for more details on our unplugged release”

In an interview with Sleaze Roxx writer Tyson Briden for the latter’s Non-Stop Rock Talk with Tyson Briden podcast, Tora Tora frontman Anthony Corder stated in part: “We deep dived into our catalogue and found a few songs that we don’t normally play. A couple of them, they’ve never been played before. So we’re gonna release it out to the fans. It’s straight off the board of the recording.”