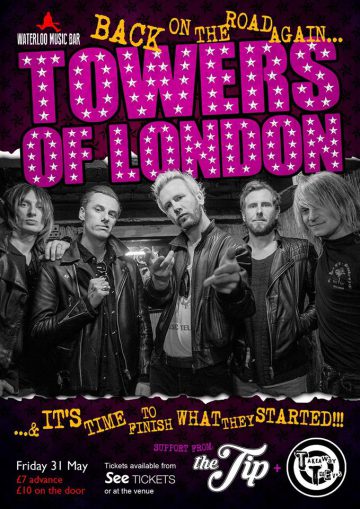 When asked whether it was good to be back, The Rev indicated (as transcribed by Sleaze Roxx): “It is, yeah. It’s the third show for the original line-up in 12 years. It is our first tour in 12 years. It’s er… We’ve come a long way. [Sarcastically] A lot of emotional support, counselling and guidance to get us to this point. We’re better than ever. Bigger, stronger than ever.”

In terms of new material, The Rev advised: “Yeah. There already is. We’re already playing. Half the set is new material. We only do four songs from the debut. It’s all about new material. That was in the forefront of our mind for the reunion. The guys had already started working on some material before myself and Snell rejoined and then collectively, we just kicked straight on with it. Definitely. That’s 100% the plan. New album coming this year.”

Wikipedia states the following in part about the band (with slight edits): “Towers of London are an English punk rock band, who formed in 2004. Their music mixes elements of rock and glam metal music with 1977 style British punk. The band have divided the opinions of the British music press since their emergence in early 2004, gaining positive reviews from some music news media and extremely negative from others.”

You can listen to the interview by Underkill TV with The Rev and Tommy Brunette of Towers of London below:

Towers of London – I’m A Rat

Video for the Towers latest forthcoming single I’m A Rat. The single is released February 12th.