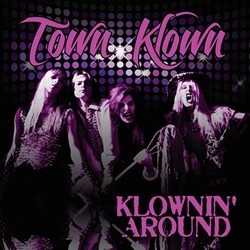 Demon Doll Records has teamed up with RS Saidso to finally unveil the mystery that is Town Klown with their first ever official CD release entitled ‘Klownin’ Around’. Comprised of the only 5 studio songs ever recorded by the group, this disc is bubblegum-glam rock to the highest degree.

For almost 20 years, the name and music has been floating around on every kind of bad sounding cassette dub possible — until now. RS Saidso has supplied Demon Doll Records with the session tapes and they have digitally remastered this classic material so it can be enjoyed by every glam and hair metal junkie around the globe.

Since Town Klown had never technically played live, the mystery behind the band has always been intriguing as to how it started, who was a part of it and how it ended. The speculation can finally come to an end with a letter and bio written by RS Saidso that can only be found on the inside booklet of this record.

If you are feeling like you need a fix, then we highly suggest you sit back and crank the knob off the stereo, as the boys might have been ‘Klownin’ Around’, but they certainly were kicking ass as well.

Officially licensed from the band, ‘Klownin’ Around’ can be purchased and previewed at demondollrecords.com/town_klown.