ToxicRose release video for new song “We All Fall Down” 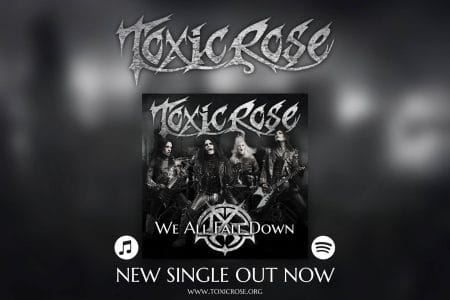 Swedish rockers ToxicRose have released a second video, this time for their song “We All Fall Down” in advance of the release of their new album Total Tranquility, which will be released via City Of Lights Records on May 16, 2016.

Sleaze Roxx recently stated the following in its review of ToxicRose‘s Total Tranquility: “It has been a long four months but it appears that we now have a worthy contender for the top spot on Sleaze Roxx’s upcoming Top Ten Albums of 2016. ToxicRose‘s first full-length album Total Tranquility is a splendid album mixing old school sleaze with more modern sounds while dabbling in the fury of the musical compositions from the now sadly retired Sister Sin…

Truth is, ToxicRose‘s new album Total Tranquility has more modern overtones than I would usually like but they do what they do so well that it has quickly rocketed as one of my favorite releases of the year. Although I find that the album tails off a little bit at the end starting with the ballad “Because Of You”, the first seven tracks are, song for song, pound for pound, really solid tracks.”

The official music video for the single “We All Fall Down” Taken from the upcoming album “Total Tranquility” Directed, filmed and edited by: Owe Lingvall Animations by: Konstantin Smirnov Get the “We All Fall Down” single here: iTunes: https://itunes.apple.com/se/album/we-all-fall-down-single/id1100673975 Amazon: https://www.amazon.com/gp/product/B01DWMV7IG Spotify: https://open.spotify.com/track/0TuXPmDGgyRNp8108DLdz0 TOXICROSE Online: Website: http://www.toxicrose.org/ Facebook: https://www.facebook.com/TOXICROSE.Official Instagram: http://instagram.com/toxicrose/ Twitter: https://twitter.com/ToxicRose_TXR