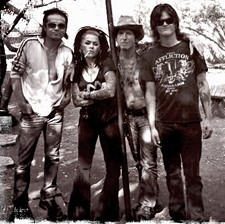 The saga of the Tracii Guns led version of L.A. Guns continues.

Two weeks ago vocalist Jizzy Pearl announced his departure from the band after a two year run, just days before the scheduled release of their live album ‘Acoustic Gypsy Live’. Tracii Guns quickly filled the vacant lead singer slot with former ‘Rock Star Supernova’ contestant Dilana Robichaux by saying, “”Dilana is the new singer for L.A. Guns after an incredible amount of scrutiny and mixed opinions the final straw was her audition where she completely took control of the environment by injecting a type of soul into these old new songs that I have never heard before. It was an awakening of just how professional and soulful of a Singer Dilana is.”

Today L.A. Guns made another line-up change, replacing bassist Jeremy Guns with Eric Grossman who had played in Dilana’s solo band. “The Theramin is coming out of retirement,” said Tracii. “Eric Grossman has joined this lineup from K’s Choice and Dilana’s solo band as we progress into a new musical journey.” “Just got the gig with L.A. Guns”, posted Grossman. “See you on the road in a few weeks. Bringin’ the low end, and rockin’ faces. Hell yeah!!!”

If that wasn’t enough, vocalist Phil Lewis (of the OTHER L.A. Guns) sent a message to Metal Sludge explaining his thoughts on the recent happenings — the entire letter can be viewed at www.metalsludge.tv.. “I’m honestly not bothered either way. What bothers me is what damage he’s doing to his credibility and to the damage he’s doing to the name L.A. Guns. Everybody here knows there are two versions and lots of fans I’ve met on the road are aware of whats going on but to the average punter who remembers “The Ballad Of Jayne”, “Sex Action”, “Rip ‘N Tear”, “Electric Gypsy” and “Never Enough”, to mention just a few of our songs, who comes in from the cold and sees Chris Van Dahl, Ralph, Paul Black, Marty Cassey and even Jizzy (Pearl) is incredibly insulting and now this chick (Dilana Robichaux) is clearly taking the piss.”

Lewis continues, “My advice to Tracii is try and find another band, he would be great with Steven Adler, he would be perfect in W.A.S.P. or Quiet Riot, he’s a gifted guitarist and can play anything and would be a major asset for any touring band but his answer would probably be his heart aint in it which is a shame because if he continues like this his heart will inventively get broken. I wish Tracii no harm or evil. Yes he did stab us in the guts when he told us he was leaving the band during the photo shoot for the cover of ‘Waking The Dead’ that lost us a world tour with Alice Cooper and shortly after got us dropped from our record deal and his response when we begged him not to leave was ‘I don’t give a fuck about you or your families’ as he looked me in the eye. Water under the bridge now, so long ago, we scrambled, got lots of help from friends and have since released three fine legitimate records that I’m incredibly proud of. ‘Tales From The Strip’ I consider to be the sweetest revenge.”

“We will continue to tour and were getting into pre production for a new record when we get back for a mid summer release next year that will be even better than ‘Tales'”, concludes Lewis. “So I’m not going to be wasting much time with this drama much longer. I wish him luck and would support anything he does other than continue to ruin the bands reputation, but given his history of making disastrous decisions, career suicide appears to be inevitable.”