Tracii Guns claims that he fired Steve Riley from L.A. Guns back in 1992 for hitting Phil Lewis

L.A. Guns lead guitarist Tracii Guns currently owns the L.A. Guns name on a 50-50 basis with drummer Steve Riley but before Guns apparently allowed Riley to trademark the band name back in or about 1996, the guitarist apparently had full control of his band.

Riley joined L.A. Guns soon after the group finished recording its debut self-titled album in 1987. Wikipedia indicates that “Riley was fired from L.A. Guns in 1992 following the group’s tour of Europe with Skid Row.” 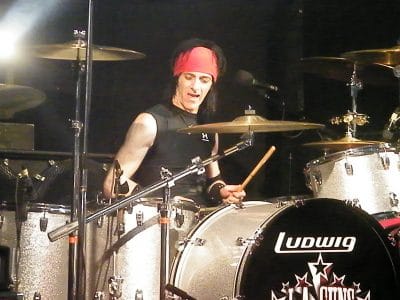 Earlier today, Guns tweeted that he “fired his [Riley‘s] fucked up face for hitting Philip” when it was mentioned on 80s Glam Metal‘s Twitter account that “Steve Riley left and started laying down the ground work of Steve Riley’s L.A. Guns” after a tweet mentioning a L.A. Guns performance at MTV Spring Break 92.

The tweets in question were forwarded from Modern Pain on Metal Sludge’s Facebook page and the following comment was made by Edison Garcia in that regard: “hey tracii you forgot to say he hit him with a newspaper…lol what a joke.”

In an interview with Greg Schmitt for Rock Eyez back in January 2008, Riley explained how he got fired from L.A. Guns back in 1992 as he stated:

“This was a real, real shitty situation. We had been going for 5 years non-stop, and everybody was getting frayed. Me & Phil had got in an argument, and Tracii fucking capitalized on it. He had told me before I got in this argument with Phil that he doesn’t want to stick around anymore, and I’m going “What?!” We were on the “Hollywood Vampires” tour in Europe with Skid Row – “What’s the matter? What’s wrong? Nothing’s wrong!” He goes, “No no no, I’m not happy – I’m not digging it.” I kinda forgot that he said that to me. And then me & Phil got into an argument on one of the tours, and we came back home & Tracii capitalized on it. He went shoulder to shoulder with Phil and said, “We should get rid of Steve.” When he called me and told me that I said, “Are you fucking kidding me? I do all the business. You guys will fall down in six months if you fucking fire me. Never mind my drumming! What I do business-wise – you guys will fall the fuck down in six months because nobody wants to do what I’m doing.” And that’s what happened. In six months, they completely broke up. It was ’cause Trace wanted the band to break up. So he’s been in a destructive mode ever since he started the band in ’86. He’s been in the mode to fucking destroy the band. It’s a real, real sick situation he’s in, I gotta tell ya.”

Riley was out of L.A. Guns from 1992 to 1995 doing session work. In the interview with Rock Eyez, Riley also explained how he ended up rejoining the band as he indicated: “I had done a shitload of sessions in those three years, and I was just bouncing around doing everybody’s demos, what have you, anything. And that’s when they finished the “Vicious Circle” thing, and Tracii called me & says, “You wanna come back & we’ll do this – the five original guys?” I said, “Yeah, sure, fine. Let’s try it,” and from that point on I was in it non-stop. I was out of it for about 2 1/2 – 3 years, and then back in it in ’95. But between ’92 and ’95, the band was broken up anyway. They had all flown in their parts for “Vicious Circle” – nobody was in the studio at the same time. And it was really, really Tracii’s doing. He made it a situation where nobody wanted to be around each other. He just created a horrible atmosphere.”

In an interview with Sleaze Roxx in December 2018, Riley emphasized: “I was the guy who worked so hard to keep the band going whether it was Tracii quitting or Phil quitting. People will remember that I never quit L.A. Guns. Not once in the 30 years that I’ve been in the band, I never quit. I’m the only original member that never quit so I worked really hard to get the band going and keep going and all the way up to 2016.” 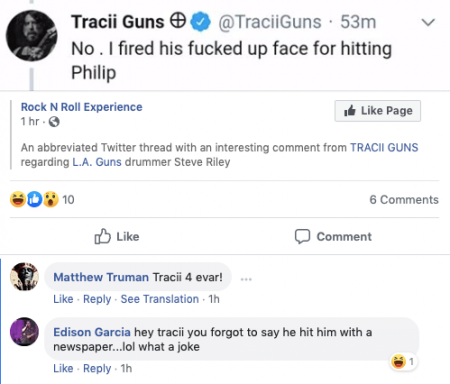