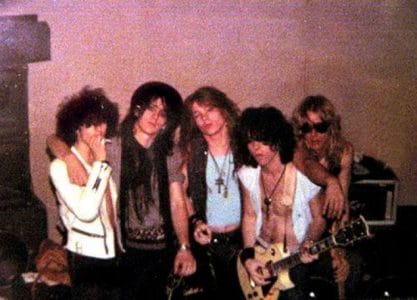 With respect to how his time ended with Guns N’ Roses, Tracii Guns stated:

“I was 19 when I left and it was a very long time ago. At the time, Axl was kind of going through something because I had never seen him angry. I’d seen him get angry where someone confronts us and we’re about to fight with somebody but between him and I we had a really great best friendship.”

“We were always together and did everything together. It got to the point where we had done these two shows over the weekend: one was at the Waters Club in San Pedro and one was at the Timbers Club in Glendora.”

“They were fine shows but Axl was really separate from the rest of the band. He kinda showed up when he wanted; didn’t say anything; and was mad that at one of the shows a friend of ours wasn’t on the guest list.”

“It didn’t turn me against him or the band but it made it really not fun. It made it like, ‘Man, what a drag. What a bummer.’ The reality of what happened was that I was living with my girlfriend in Covina and we rehearsed in Hollywood. We were supposed to rehearse Thursdays so after that last gig at the Waters Club everybody said, ‘I’ll see you Thursday’ and I’m like, ‘Yeah, OK.'”

“I just didn’t call or show up or anything like that. I got a call and they said, ‘What are you doing?’ and I was like, ‘Well, I can’t get there.'”

“I was just having really bad vibes. I blew off Friday’s rehearsal and I knew we had a show coming up at the Troubadour but I knew we’d be fine and I said, ‘Look, man. We’ll be fine. I don’t wanna drive all the way in there and I don’t wanna get in a fight with you.’ Axl was like, ‘No, man. We gotta do this.'”

You can read the rest of the interview with Tracii Guns at Ultimate Guitar.