Tracii Guns obtains US trademark for words “L.A. Guns” but still shares one for logo with Steve Riley 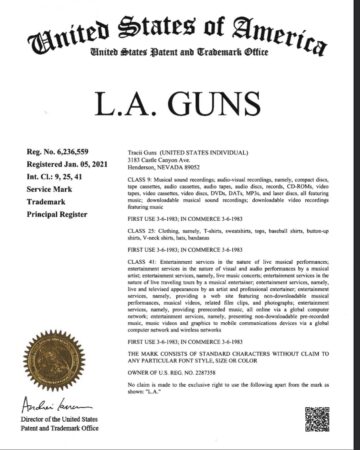 L.A Guns founder and guitarist Tracii Guns has seemingly obtained an advantage over his “nemesis” Steve Riley with respect to the dispute over the L.A. Guns name since Guns recently obtained a trademark in the United States of America for the words “L.A. Guns.”

The guitarist posted on his Facebook account earlier today that he received a certificate from the United States Patent and Trademark Office for the words “L.A. Guns” that were registered on January 5, 2021 and which indicates that he has been using those words since sometime in 1983.

Without any explanation, one might think that Guns has won his legal battle over Riley over the L.A. Guns name.

However, it appears that Guns and Riley are still 50-50 owners of the original L.A. Guns logo given that there is a trademark in that regard that was filed back on March 30, 1998 and registered on October 19, 1999 with the first use dating back to 1987. The logo trademark was renewed for a second time on June 6, 2019.

While Guns has yet to publicly reveal what advantage that he has obtained through his trademark registered on January 5, 2021, and Sleaze Roxx is no legal expert, it appears that Guns may now have gained more flexibility with the use of the words “L.A. Guns” while Riley might be restricted to using those words within the logo for which he is a 50% owner. You can obtain more information through various websites including Trademarkangel. Only time will tell in the presumed ongoing legal battle between the two L.A. Guns camps.