L.A. Guns guitarist Tracii Guns was interviewed by Aaron Small for Bravewords prior to the group playing its gig at The Rockpile in Toronto, Ontario, Canada on July 16, 2018. 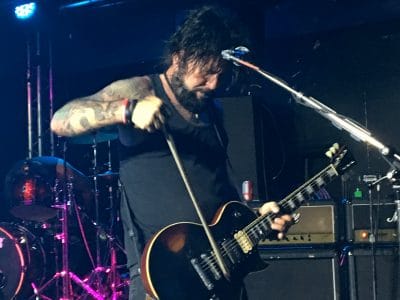 Bravewords noted that there were seven L.A. Guns albums of original material featuring both guitarist Tracii Guns and lead vocalist Phil Lewis. In terms of whether L.A. Guns would consider playing any songs from the studio albums Tales From The Strip (2005) and Hollywood Forever (2012) which featured guitarist Stacey Blades rather than Guns, the latter opined:  “Fuck those songs man. That’s not L.A. Guns, I’m not on those records.”

Bravewords also noted that Guns N’ Roses has recently performed Velvet Revolver‘s song “Slither” even though singer Axl Rose was not involved in the latter band. Guns noted: “I think Axl’s being nice… It is a good song, it was massive on radio. But nobody knows shit off those fucking L.A. Guns records; it’s the truth. Nobody knows shit off half the records I did with L.A. Guns either. The first three, maybe a glimpse of Vicious Circle, a glimpse of Waking The Dead. Those are records we love, and there’s certain songs from those that the audience knows, but overall, to be realistic, the first two records and ‘Kiss My Love Goodbye’ and ‘Over The Edge’ off Hollywood Vampires – that is by far and away the most popular stuff. Then there’s The Missing Peace – it came out of nowhere.”

You can read the rest of the interview with Tracii Guns at Bravewords.