Broken Teeth, the Austin, Texas band led by iconic vocalist Jason McMaster, have now disclosed which tracks will be on their upcoming EP Bulldozer, which will be released on both CD and vinyl on October 23, 2015 via Texas Metal Underground Records.

The Bulldozer EP features five original Broken Teeth songs including three unreleased tracks, “Devil On The Road” from their best of CD, and “Flamethrower” which was previously only available as a digital download single. Bulldozer also features two  cover songs: Motorhead‘s “The Hammer” and Aerosmith‘s “Lightning Strikes.”

Sleaze Roxx interviewed McMaster earlier this month and asked him about Broken Teeth‘s tendency to include already released tracks or re-record songs on subsequent releases. McMaster replied: “If you have four or five new songs, and you feel like you have waited a while to release something, instead of just putting out those four new tunes, it’s better to stack them with a couple of different versions, or other material to justify as close to a full-length as you can. Better to have a snack instead of a crumb. We feel lucky enough to have three full-length releases and now four more that are special collections and or live recordings. There 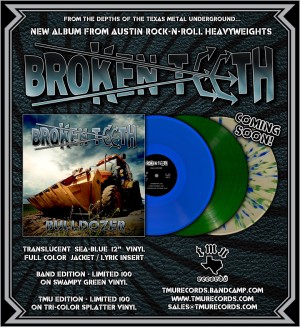 is not any other answer as to why. It’s more like, why not?” With respect to whether the title Bulldozer had any significance, McMaster stated: “The original idea of having this huge earth moving digger/bulldozer thing on the cover of something, was exciting to us. We had this as an idea, but without a title, and that was gonna be it. Then we started coming up with ideas about what if we called it what it is? So we did! No real brain behind it, just good rock n’ roll that makes the earth move.”

Broken Teeth will be holding their Bulldozer CD/vinyl album release party on October 23, 2015 at The Sidewinder in Austin, Texas, USA.

Track List for Bulldozer:
Raining Fire
The Rough and The Tumble
Red River Rising
Devil On The Road
Flamethrower
The Hammer
Lightning Strikes