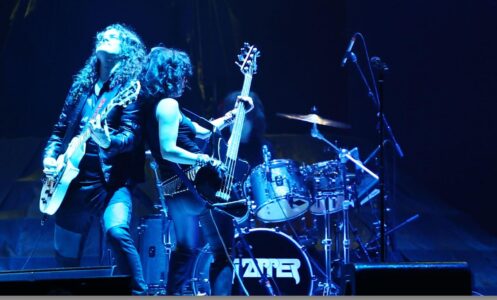 “Back and ready to rock with new music in 2021! Canadian hard rock group Trapper is comprised of Emm Gryner (vocals), Sean Kelly (guitar), Tim Timleck (drums), and Frank Gryner (guitar, producer), each acclaimed and respected Canadian musicians in their own right. With impressive individual credentials working with the likes of David Bowie, Cmdr. Chris Hadfield, Nelly Furtado, Lee Aaron, Carole Pope, and Helix, they have come together to create and perform original music that honours the 80s rock they live and breathe. Based in Toronto, members hail from Ontario towns such as St. Marys and North Bay with a sound big enough to fill any arena.

Trapper entertained tens of thousands of fans as special guests on rock icons Def Leppard’s 2015 Canadian tour, an opportunity that sparked the creation of their debut EP “Go For The Heart”. “Sometimes the best things are effortless” says drummer, Timleck. With the positive response they received on the Canadian leg of the Def Leppard tour, Trapper knew they had found something special in each other: likeminded, seasoned professionals coming together with a respect and understanding that equals their passion.

“We grew up with this stuff, we learned it well, and we have the chops to pull this music off in an authentic way,” shares Kelly. “We have developed a certain acumen with our stagecraft and showmanship.”

Trapper’s “old school, new rules” attitude is what forms the basis for their sound. Drawing inspiration from classic acts such as Heart, Queensrÿche, Winger and Whitesnake, Trapper aims to bring fans back to the first time they heard 80’s rock, making them fall in love all over again. Their most recent singles “Winterlong” and “You Need An Angel” connect to the spirit of the best of 80s rock. “I want Trapper’s music to kind of represent that summer lifestyle”, says Gryner. “There were all the great outdoor concerts, trips to the beach and parties. People remember that time in the 1980s with such fondness.” These two singles give fans a taste of Trapper’s upcoming EP to be released later this year.””

Trapper performing “Grand Bender” live at the Budweiser Gardens In London, Ontario, Canada on May 5, 2015: