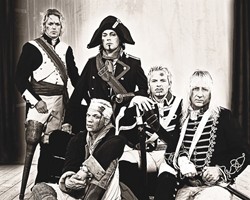 Swedish melodic rock legends Treat are celebrating their 30th anniversary in 2013 and announce some mouthwatering news for all their fans. Treat will release a special 30th anniversary edition package, containing a best-of album with two brand new songs and two previously unreleased songs, and their latest album ‘Coup de Grace’ — regarded as a “masterpiece” by Classic Rock Magazine and voted into the Top 20 Albums of 2010 by SleazeRoxx.com readers — with an extra track.

Treat also plans a big tour, that will kick off with some major festival gigs in the summer, and will see them rockin’ on the road in to the autumn. Then it’s over… For good.

“We have a saying in Sweden: You should always leave the party when you have the most fun,” says guitarist and songwriter Anders Wikstrom who formed the band back in 1983 together with singer Robert Ernlund. Say what? Treat is breaking up! Treat has never been a more tight knit rock’n’roll unit than now, and the band is brimming with creativity and excitement. That’s why the band now chooses to call it a day; they want to, as they put it, “end on a high note.”

“We’re doin’ it out of love and respect for our fans”, Anders Wikstrom says. “We quit before they ask us to get the hell out. We want Treat’s legacy to be pure rock’n’roll happiness!”

The decision to close down operation is most amicable, and kind of grew upon the five in the band, but when the decision was made, the band almost immediately started making plans for the farewell party next year. “We’re going out with a bang and will give our fans a ride they didn’t even knew they wanted,” says Wikstrom.

Treat, who released their classic debut album ‘Scratch and Bite’ back in 1985, now also introduces the new bass player Fredrik Thomander, who for years been close to ‘The Band Of Brothers’ that Treat are. Fredrik has been co-writing songs with the band, mixed ‘Coup de Grace’ and has already done some gigs as a Treat Brother.

“We wanna party with our fans”, says Robert Ernlund and adds: “The Treat’s on us!”