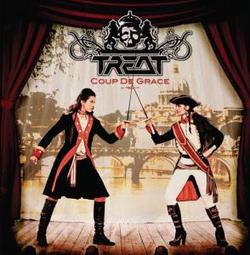 Twenty-five years after the release of their sensational debut album “Scratch and Bite” and eighteen year since their last self-titled studio album saw the light of day, Swedish melodic rock legends Treat are out to get you on the run again!

“Coup de Grace” is the album that every melodic rock fan hoped for but never dared to dream of: a classic rock masterpiece with thunderous guitars, powerful yet seductive melodies and hook-laden songs, all wrapped up in a production that combines the best of “now” and “then”.

“It’s been twenty-five years in the making”, says guitarist and main songwriter Anders Wikstrom. “Since day one I knew we had this album in us. The ideas were there. The vision. But it took us this long to find the right tools to make it all come true. It took five albums, millions of miles on the road, a thirteen year long break and a whole new perspective on life to get it right. In hindsight it now seems that everything we’ve done since we formed the band has been pointing in one direction. Of course we didn’t know it back then, but this is what we aimed for all along”, says Anders.

So here we are, in 2010 Treat is releasing their sixth album, not counting the best of “Weapons of Choice”, released when the band reformed in 2006. “Coup de Grace” is a collection of songs that is so much more than just kick-ass-sing-along-rock’n’roll-songs. They are more a sort of mini autobiographies from five grown men reflecting on life. Back then, in the 80’s, it was rock’n’roll twenty-four-seven: big guitars, big choruses, big hair, babes and booze.

“This album is a statement of who we are today”, explains Anders Wikstrom. “We’re older… yeah, perhaps even wiser. We look at our lives and the world around us in a different way. I wanted to reflect that in our lyrics. I mean, we’re all fathers and we raise our kids in a world that’s in a turmoil”. There’s a lot of pressures, fears and tough expectations. The rat race is spinning out of control, but everybody expect you to be happy. The big guitars are still there and became even bigger. The big choruses. The big sound. The hair… yeah, well, you know: they’re in the mid forties. Booze? Nah. Babes? Yeah. Their wives and girlfriends. The mothers of their kids. But there’s as new “big” in the Treat equation: the courage to let their fears, worries and views on both politics and the modern life that wears us all down reflect in the lyrics. “It was the natural thing to do. I mean, life is so much more than rock’n’roll all night and party every day”, says Wikstrom.

But make no mistakes: Treat is a rock’n’roll brigade. A force of nature. Today even stronger and more powerful than ever. From the opening somewhat haunting prelude, that sets the tone of the album, the right-in-your face rock’n’roll grenade “The war is over”, the soul searching “Paper tiger” to the trademark power ballad “A life to die for” and “Roar”, where the band manages to make an epic with a hit feeling, Treat is telling all the world that they’re back. Bigger, better and bolder.

“We got back together in 2006 because we all missed playing together. We released a compilation album and did a tour, but we weren’t sure what to do next. In 2008 we all felt that we had an album to do”, continues Wikstrom. “I started demoing songs and in May 2009 we were ready to hit the studio”.

Produced and recorded in Stockholm, Sweden by Anders Wikstrom, partly together with keyboard player Patrick Appelgren, “Coup de Grace”, is an album that’s going to stand out in a musical climate where mediocrity and superficiality are an asset but where talent, musicianship and dedication is not required to make the charts.

“This is our footprint in the history of rock’n’roll”, concludes Anders Wikstrom. “We can proudly say that this is the album we would like to show our grandkids!”