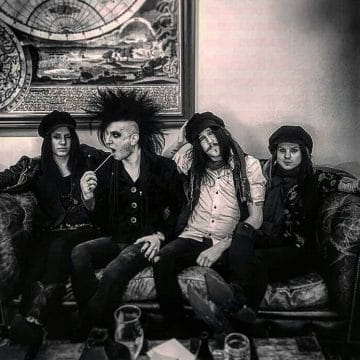 Trench Dogs‘ “Story” on their Facebook page is as follows:

The Trench Dogs have a groovy little cocktail of influences; rooted deeply in the music freaks who staggered the stage in the past.

With members hailing from all corners of the world and each with a unique tale to tell, the music captures the mixed “tradgedy and bliss” of this strange existance… that and the faint smell of piss.”

Sleaze Roxx stated the following with respect to the Trench Dogs‘ EP Fashionably Late: “So imagine my delight while perusing the web when I came across a picture of the Trench Dogs. Could it be? I see shades of Hanoi Rocks, a glimpse of Faster Pussycat, a nod to Jetboy, a touch of Dogs D’Amour and that’s just from the pictures alone! I contacted the band, purchased a CD and sat back to take in the sounds. So what do I hear you say? What’s it like? Was I transported to the days of hairspray and lipstick? Well, yes and no.

While not the OTT glam rock of say Poison or the colorful bombast of Tigertailz or even the sugary pop of Heartthrob Mob, what we do get is much what I described in my photo assessment. There are touches of Hanoi Rocks, a bit of Dogs D’Amour and some Faster Pussycat and I will say they may be taking over for their fellow countrymen who have called it quits — Vains of Jenna. Vocalist Andy H sounds like a cross between Lizzy DeVine and Taime Downe. Musically, they nail the aforementioned bands with a bit of their own Trench Dogs strut (more on this later). Being only a four song demo EP, it is a bit short and I am craving for more.”