Swedish rockers Trench Dogs were recently interviewed by The New Wave of Hair Metal‘s senior admin Tom and spoke about their album that they are working on. 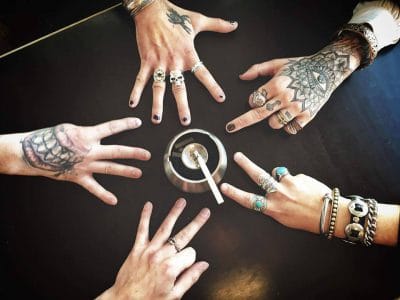 In terms of when we can expect to hear the new Trench Dogs album, the group advised: “Oh baby! We are going into production at the end of February. It’s gonna be a big one, the song writing, the production, the line up… This album will shit all over anything we have released previously. I can’t wait. Not sure about a release date yet, we will be putting it out ourselves so there’s no deadlines!”

The band went on to add: “Once you hear this album you will instantly realise it’s different than every other band on the scene. I think we have something here, we’re walking the line between something ugly and something beautiful. It’s coming soon!”

With respect to losing one band member and gaining two, the Trench Dogs advised (with slight edits): “You can’t say lost! It’s as if he died! He’s fine! Li is now living in Sydney, Australia and kicking ass. We were lucky enough to replace him on bass with Daniel Ekholm. He’s always been a well known rock n roll DJ on the scene so it was only a blessing when we realised he was a wizard on bass! Our Charming Rhythm guitarist is from London, England! I’m not really sure how we met that beer drinking Brit but he really ties our sound together. Having two guitars is a first for Trench Dogs and a major game changer, Howard Spides Chapman has helped us take shit to the next level.”

You can read the rest of the Trench Dogs‘ interview at The New Wave of Hair Metal‘s Facebook page.

Trench Dogs – Self Sabotage Video made by Tobias Don Rydsheim.