Canadian east coast rockers Tri City Villains have released a video for their new single “She’s On Fire.” The band embarked on what appears to be its first tour outside Canada’s Maritime provinces as it has six shows scheduled in the province of Ontario including in the city of Toronto between March 23 and 29, 2017. 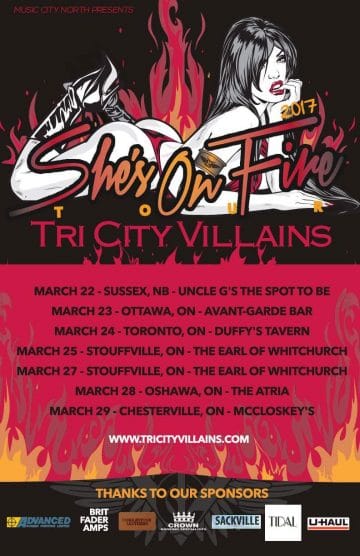 “In the lethargic, rural pace of Southern Nova Scotia, one young Rock group has managed to create waves in the East Coast music scene. Tri City Villains are a Canadian Rock N’ Roll band that have not yet forgotten the styles of our predecessors, and their combination of soulful lyrics intertwined with a gritty Rock backline lay the groundwork for a thrilling performance from start to finish.

Tri City Villains quickly gained local notoriety in the Halifax music community due to their high- energy shows, extremely catchy riffs, and relatable style. The Villains were easily able to secure local and international radio airplay and were featured on Route 104 (Q104) for an interview and performance showcase.

Their seemingly instant rise to local fame soon earned them evening slots performing at local music clubs, and invitations to music festival weekends during the Summer of 2015. Steve Cole and Jay Corkum comprise the guitar and lyrical tandem of Tri City Villains. With Steve bending the guitar and vocal c(h)ords into heated Rock modes, and Jay rolling out the rhythm guitar and sizzling lyrical melodies, this duo can grab the audience by the collar and drag them along for the ride.

Dave Pickup and Sean Sawler round out the ensemble with the perfectly balanced rhythm section of bass guitar and drums respectively. The low-end, chest-pounding frequencies and sharp string and head attack of Pickup and Sawler pave the way for the group’s romantic yet aggressive lyrics to sit firmly up the middle. The album; “Tri City Villains” features lines and modes not heard since the likes of April Wine and The Cult, and boasts four like-minded musicians working together to achieve a common goal; to make great music and have a great time.

The Villains have their work cut out for them in 2016. With a two-track single set to be released in April, and a full-length sophomore album to be recorded in December, there will be no shortage of new Rock N’ Roll music to hit the stages and the airwaves this year…”