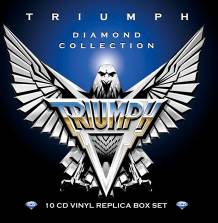 Triumph is one of Canada’s greatest Hard Rock bands. With 10 classic albums released between 1976 and 1987, they have left an indelible mark on the history of Hard Rock, Melodic Rock and are nowadays considered among the forefathers of Progressive Metal.

Epitomizing the essence of the Power trio sound: Rik Emmett (guitar and vocals), Mike Levine (bass and keyboards) and Gil Moore (drums and vocals) are regarded as virtuoso musicians in their own right and great entertainers thanks to the Triumph concert spectacle that was second to none.

Frontiers Records is therefore proud to announce that the official reissues of Triumph’s 10 classic albums, in digipak version and with the original tracklistings, will be released on December 3rd.

All CDs have been remastered and feature an extensive booklet including lyrics.

In addition, Frontiers will issue a very limited collector’s edition Box Set entitled “Diamond Collection” which will include all the 10 albums in vinyl replica, and will feature the artwork from the original vinyl edition of the albums.

While future plans remain uncertain for the band, and after the recent reunion shows, the time to re-live the impressive legacy of their music has come. This new set of reissues is a real present to the Triumph fans, both old and new, who now have the opportunity to own these timeless masterpieces of Classic Rock. Enjoy !