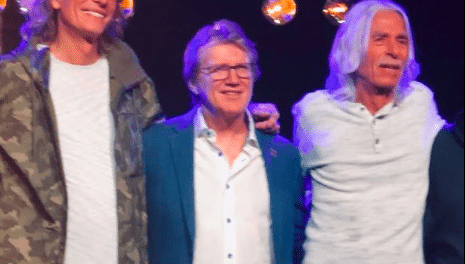 The following message was posted by M.E.A.T. magazine publisher Drew Masters on the public M.E.A.T. Facebook page earlier today: (with the photograph):

“On Saturday November 16, Canadian Rock legends **TRIUMPH** reformed their classic lineup — consisting of drummer Gil Moore, guitarist Rik Emmett, and bassist Mike Levine — and played together publicly at an invite-only event to approx 300 “superfans” at MetalWorks studio in Mississauga (taped for a forthcoming documentary “Triumph: Lay It On The Line“)… this was not only their first performance in 11 years, but the first as a pure 3-piece power trio in 31 years!… tracks played were “When The Lights Go Down”, “Lay It On The Line”, and “Magic Power””

Back in September 2019, Banger Films announced that they were working on the first ever documentary about Triumph titled Triumph: Lay It On The Line, and that the producers would be offering fans a once-in-a-lifetime opportunity to attend a special event in Toronto that would be filmed for the documentary

Wikipedia states the following in part about Triumph (with slight edits): “Triumph is a Canadian hard rock band formed in 1975 that was popular in the late 1970s and the 1980s, building on its reputation and success as a live band. Between the band’s 16 albums and DVDs, Triumph has received 18 gold and 9 platinum awards in Canada and the United States. Triumph was nominated for multiple Juno Awards, including Group of the Year Award in 1979, 1985, 1986, and 1987. The band was inducted into the Canadian Music & Broadcast Industry Hall of Fame in 2007, into the Canadian Music Hall of Fame in 2008, and into Canada’s Walk of Fame in 2019.”

Triumph‘s “Lay It On The Line” video:

Triumph – Lay It On The Line (Official Video)

Music video by Triumph performing Lay It On The Line. 2010 TML#Triumph #LayItOnTheLine #Vevo

Triumph‘s “When The Lights Go Down” video:

Triumph – When The Lights Go Down (Video)

Distributed by WMGWhen The Lights Go Down (Video)