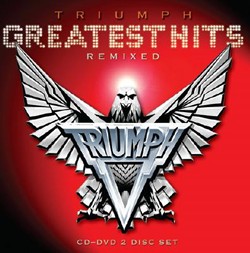 The two-disc set, which will be in the shops on May 14th, includes a hit-laden 14 track cd, which was remixed by Rich Chycki (Aerosmith, Rush), giving the songs an incredible sonic wallop. A previously unreleased recording of “Love Hurts” will be the new lead single.

The DVD features eleven promo and live videos in widescreen filmed over Triumph’s career, as well five bonus features, including 3 more unreleased videos (“Child of the City,” “Blinding Light Show” and “Love Hurts”) and footage of Triumph’s induction into the Canadian Music Hall of Fame in 2008.

“We have been planning this release forever,” says Mike Levine. “For years, Triumph fans have been demanding that we give them a fresh greatest hits package and they are going to love this one.”

The 6-panel digipak will also include a 20 pages full colour booklet, complete with liner notes, lyrics, credits and chockfull of vintage photos and will most certainly be a hit with Triumph’s consistent legion of fans.

Triumph pushed the limits of Arena Rock to the max with their legendary live shows and virtuoso playing. Add to it some of the most recognizable and celebrated radio classics (“Lay it on the Line”, “Hold On”, “Fight the Good Fight” and “Magic Power”), a vault full of gold and platinum sales awards for their ten studio albums and there you have one of the most successful rock acts of the 1970’s/1980’s!

And now, fans both new and old will have the opportunity to discover/re-discover Triumph, with the all killer/no filler ‘Greatest Hits Remixed.’

Frontiers looks forward to work with Triumph and plans more surprises for the fans of this amazing band !

“Greatest Hits Remixed” includes:
CD: Allied Forces; Lay it on the Line; Follow Your Heart; Magic Power; I Live For the Weekend; Hold On; Just One Night; Fight the Good Fight; Spellbound; Never Surrender; Lights Go Down; Somebody’s Out There; Rock and Roll Machine; Love Hurts.