Trixter bassist P.J. Farley had to step up his game to play Billy Sheehan’s bass parts on Mr. Big songs

Trixter bassist P.J. Farley was interviewed by Hall Laurel for the book Soundtrack of Our Youth: History of Hair Metal Music, which was recently released and is available in Kindle and paperback formats.

Farley along with Trixter guitarist Steve Brown have been playing gigs as the back up band for Mr. Big frontman Eric Martin over the last couple of years. 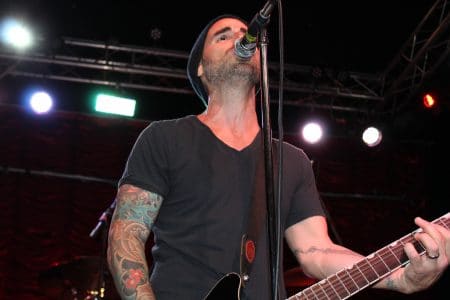 In terms of how Farley and Brown ended up playing shows with Martin, Farley advised (with slight edits): “We have known Eric since 1991. Last year he had a Japan tour booked that he needed a band for so he asked us to play with him. That was the seed because Japanese promoters and fans caught wind of it and we were asked to incorporate some Trixter material into the show. From there it was a free for all. We did everything from Mr. Big and Eric‘s solo stuff to Trixter, as well as a 40ft Ringo tune and one of my solo tunes. It’s very easy going and FUN!!”

On whether he felt any pressure replacing Billy Sheehan who was touted by Laurel as maybe the best bassists of their generation, Farley replied (with slight edit): “HaHa, replacing?? That term never entered my mind but I did step up my game in order to somewhat remotely come close to doing his parts justice (which is always a work in progress lol). No doubt an honor to play those songs and show my respect and admiration for Billy, I’ve been a fan of his since I saw him play with Talas in I think 87. The Japan tour with Eric was more about obscure pop Mr. Big tunes and less of the shred stuff but as we have brought it to the States, we have included all the fun crazy stuff so its been a nice challenge.”