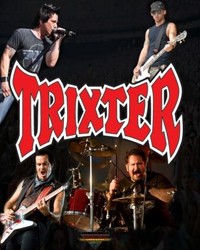 Trixter Firing Up The Engines For A 2012 Comeback Album

Frontiers Records is pleased to announce the signing of Trixter for the worldwide release of the band’s reunion album in the spring of 2012.

Formed in Paramus, New Jersey during 1983, Trixter would learn their chops playing live in the club circuit around their hometown with the likes of Skid Row and Kix, before eventually getting signed by Mechanic/MCA for their self-titled debut album in 1990, which spawned the Billboard Hits and #1 MTV Videos “Give It To Me Good”, “One In A Million” and “Surrender” and went on to become gold. The band toured nationally during 1990-91 sold out arena tours with Poison, Scorpions and Warrant. Trixter’s second album, ‘Hear!’, was released in October 1992 and the band toured in support of KISS. Unfortunately the change of musical climate made it impossible for the band to keep going so, after the release of an independent covers album, the band called it quits in 1995.

Trixter finally announced the reunion of the original lineup in 2007. Since then the band played several shows, including a successful appearance at the Rocklahoma festival in 2008. “The band has been playing together for the last 4 years, so making a new record is the next logical step,” tells guitarist Steve Brown. “We are all very excited: the new CD will be entitled ‘New Audio Machine’ and is a classic style Melodic Hard Rock album. All the sounds people have loved about Trixter will be there… Great songs, big guitar riffs, catchy vocals and a huge bottom end. A total big rock production!!!”

Trixter are now formed by Pete Loran on lead vocals and guitar, Steve Brown on lead guitar, P.J. Farley on bass and Gus Scott on drums. “We take pride in the fact that we are one of the few bands of our genre that have all original members,” says Brown.

With an arsenal of great new songs and a catalogue of two successful releases Trixter are looking forward to bring their songs on stage. “We are hoping to land a support slot on one of the major summer tours,” concludes Brown. “And we finally hope to play our first European tour as well.” Get ready for the return of Trixter!

More information on Trixter and the upcoming CD can be found at www.frontiers.it and www.trixterrocks.com.