The Wizards of Winter‘s press release states in part (with slight edits): 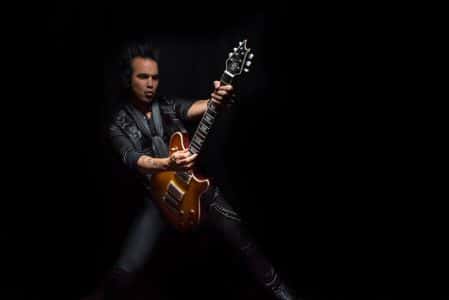 “Holiday rock ensemble the Wizards of Winter – featuring former members of the Trans-Siberian Orchestra, Rainbow and the bands of Alice Cooper and Ted Nugent – are thrilled to add another world class member to their talented midst! The Wizards of Winter are pleased to welcome lead guitarist Steve Brown to the ensemble performing on their upcoming 2019 tour.

Steve Brown was born and raised in New Jersey and destined to live a life submersed in music. The self-taught artist picked up his first guitar at 8 years-old and never looked back. Steve began his life-long love affair with live performing at the ripe old age of 12, when he became a regular on the voltaic NJ rock scene of the ‘80s. At 12 years-old, he began writing music, lyrics and founded his first band, Trixter. It wasn’t long before Steve led the mighty Trixter to massive arena shows, a record deal and transcontinental tours with the likes of KISS, Scorpions and Poison.

To date, Trixter has over a million records sold, 3- #1 MTV videos and 3 Top 100 Billboard Singles, all penned by Brown. From personal endorsements by Eddie Van Halen to churning out original music for some of television’s most popular hits, to regularly hitting the stage with an ever-growing list of rock and roll greats, Steve Brown is in constant demand. Most recently, Steve has played with Dennis DeYoung (formerly of Styx), Joe Lynn Turner (formerly of Rainbow, Deep Purple, Yngwie Malmsteen), and on Broadway in the hit musical “Rock of Ages.” In 2013 and again in 2018, Steve was invited to be the vicarial guitarist for the legendary Def Leppard, which led to him joining the band at the historic Wembley Stadium along with many other arena and stadium shows throughout North America.

Steve Brown says, “I’m really excited to be joining the Wizards of Winter this coming holiday season! They are a great bunch of talented musicians and the chemistry so far is excellent. I am looking forward to seeing you all on the road!”

Wizards of Winter founder and keyboardist Scott Kelly adds, “Steve is the real deal. His long list of credentials speaks for itself. We are excited to have him join the band and greatly look forward to rocking with him on this year’s Winter tour.”

The Wizards of Winter are an ensemble performing classical and progressive-influenced rock music woven throughout a theatrical holiday-themed show, performed in an intimate setting.

Each night on tour, the Wizards of Winter evoke the spirit of Christmas, weaving a story entirely based on their latest full-length album, The Magic of Winter, and new music from their up coming album, The Christmas Dream. Each Wizards of Winter performance showcases soaring vocal harmonies, precision string instrumentation, outstanding guitar leads, powerful percussion and stunning keyboard work – taking the listener on a musical “sleigh ride”, covering many genres from pop to progressive rock. Previous tours have seen the Wizards of Winter performing their brand of theatrical yuletide rock to tens of thousands of attendees and has grabbed the attention of mainstream media such as Entertainment Weekly and Yahoo Music.

Stay tuned for more information coming soon on the Wizards of Winter‘s 2019 touring schedule, and listen to their latest single, “Salzburg Carol” – an enchanting medley featuring segments of the classic holiday tunes “My Favorite Things” and “Carol of the Bells” – here.

The Magic of Winter, which features the unforgettable single, “The Spirit of Christmas”, can be ordered in physical format here or purchased digitally via iTunes.”

The Wizards of Winter‘s “The Spirit of Christmas” video:

Wizards of Winter The Spirit of Christmas