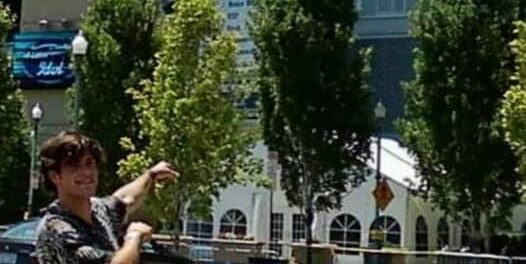 Trixy Tang frontman Klay Fennema recently shared his beginnings into his foray to become an international known musician as he shared his recollection of his addition for American Idol from a decade ago.

The following message was posted on Fennema‘s Facebook page yesterday: 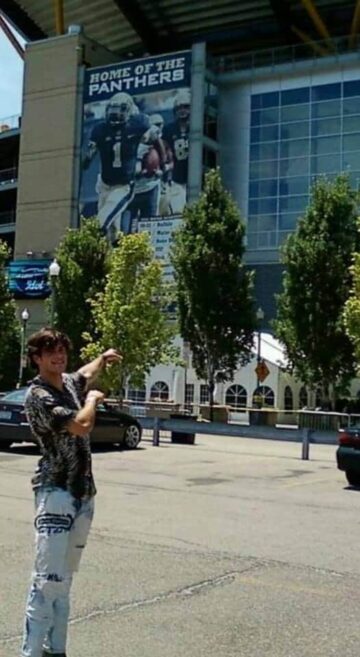 10 years ago my Mom and I ventured to Pittsburgh, PA. So that I could audition for American Idol. I was 19 years old, just had started a band and I wanted so badly to give this a shot so I could say I tried it.

We arrived to a stadium full of 10,000 people where you were called up by section to sing a 20 second part of whatever song you choose while standing next to 5 other people. My Mom and I waited HOURS for that moment.

My heart was racing and I was so nervous. Mom waited in a guest entrance for me to walk to after I was done. I turned the corner and had that coveted ticket in my hand to go to the next round of auditions a couple weeks from then.

The look on my Mom’s face was priceless and so heartwarming. I think it was safe to say she was even more excited than me! Haha.

Needless to say I went back a couple weeks later to not make it any further than that but I was told I was only a few hundred out of that 10,000 that day to proceed which I thought was very cool.

It was such a wonderful memory and experience and I’m so happy I did that with my Mom. She was a huge supporter and just wanted me to follow my goals and not give up. Well I still am and I still haven’t

“American Idol is an American singing competition television series created by Simon Fuller, produced by Fremantle North America and 19 Entertainment, and distributed by Fremantle North America. It initially aired on Fox from June 11, 2002, to April 7, 2016, for 15 seasons. It was on hiatus for two years until March 11, 2018, when a revival of the series began airing on ABC.

It started as an addition to the Idols format that was based on Pop Idol from British television, and became one of the most successful shows in the history of American television. The concept of the series involves discovering recording stars from unsigned singing talents, with the winner determined by American viewers using phones, Internet, and SMS text voting.” 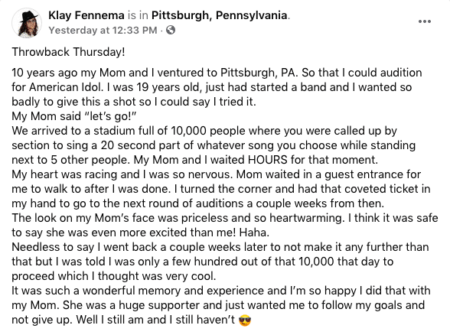