Michigan, USA based rockers Trixy Tang have released a video for their song “My Life” which has the four band members playing the track live from four different locations due to the Coronavirus pandemic “quarantine.” “My Life” appeared on Trixy Tang‘s self-titled debut full-length album, which finished at #10 on the Sleaze Roxx’s Top Ten Albums of 2019. 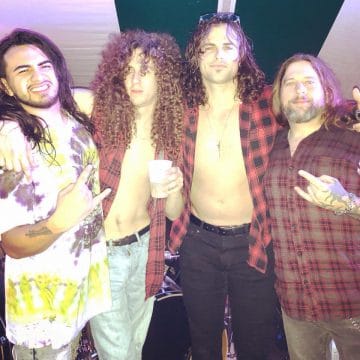 “Since we’ve all been stuck in quarantine and lockdown these days, we decided to each film ourselves performing our ORIGINAL Song “My Life” from our homes and mash it up together!

“My Life” by Trixy Tang – written about living the life you want to live and not letting anyone hold you down.”

Sleaze Roxx stated the following in its review of the album Trixy Tang:

“Getting back to Trixy Tang, and as previously stated, there is a real good time / party feel to the tracks on their album. There’s also some soaring guitar solos from Rey Hernandez (check out the opening track “Fade Away” as an example), which give the songs a real ’80s flavour to them. Throw in Klay Fennema‘s great voice, party flavoured comments (such as on “Lust” where you can hear him commenting to his bandmates about a female) and falsetto screams, and you can understand why I’m so excited about this album. In fact, Fennema seemingly goes from first to fifth gear on many occasions during songs singing away before letting out these high pitched screams (check out “Fade Away” and “Rock Me Pop Me”). I could go on and on about each song on Trixy Tang‘s self-titled album but let’s just say there’s no weak track on the record. I even like the acoustic ballad “Mother Mary” and that’s mainly due to Fennema‘s terrific vocal performance on that track.”