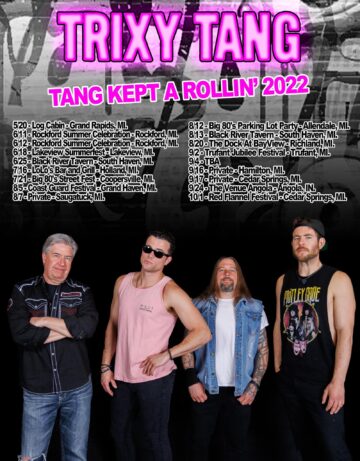 Speaking exclusively to Sleaze Roxx, Fennema revealed how Trixy Tang found their new guitarist. “Kerry McDonough moved to Grand Rapids [Michigan] from Orlando [Florida] where he was the guitarist for a well established local band, but got a job offer in Michigan and decided to move. He immediately jumped into the music scene looking for a band that fit his style but couldn’t seem to gel with the right players. I had known him from the scene and he had come out to our shows to show support and I always liked him a lot. Really genuine, and a great player.

Within the last year, post pandemic, I was seriously considering ending the band entirely out of sheer exhaustion, disappointment, etc., not to mention I had my other band Klay N’ The Mud. Trixy Tang had a show coming up though and I needed a guitarist to fill in for us so I contacted Kerry. He learned our whole set, and absolutely crushed it. He then showed interest in being our full-time guitarist, and at first I wasn’t really interested in the idea since I wanted to end the band, but Kevin talked me out that idea and we decided to continue on. Kerry and I met for a three hour coffee session, talked about plans, etc. and he was then solidified in the band. We’ve done about 15 shows together so far and it’s been a huge breath of fresh air. We are back to having fun again, and that’s what we want to do. We all have outside careers, we all have things going on. We want an outlet to have fun and we’re back at it. It’s exciting. We are definitely planning on recording another album very soon and have new material in the works.”