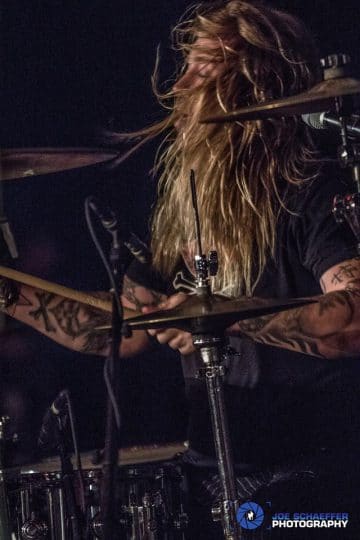 Current Lost Angels, and former White Lion, Pretty Boy Floyd and Enuff Z’Nuff drummer Troy Patrick Farrell was recently interviewed by Chuck Shute for the Chuck Shute Podcast. The drummer shared a number of interesting stories about some of the artists / bands that he’s played with including getting fired from Jani Lane‘s solo band and having Pretty Boy Floyd guitarist Kristy Majors chasing him down to beat him up!

With respect to the latter, Farrell was asked what was the craziest thing that had happened to him to which he replied (as transcribed by the Chuck Shute Podcast with slight edits): “Pretty Boy Floyd… Kristy Majors chased me down in a hotel and tried to beat me up in Stockholm, that was my last show in Pretty Boy Floyd.”

Farrell added: “Yeah, he was mad because he thought I got my own hotel room and I was trying to cheat him out of the room when actually I was looking for them to swap rooms with them and they were… I love Kristy, but when he gets, when he’s in a mode and he thinks that that’s what’s happening, then he just, he’s full force and it’s like, ‘This isn’t the story man.’ This is not what I wanted. So he chased me down. Thank God Chris, the bass player, tackled him and stopped them from beating me up.”

You can listen to the entire interview with Troy Patrick Farrell on the Chuck Shute Podcast via the Buzz Sprout website.