Trucker Diablo release video for song “Other Side of The City”

Northern Ireland rockers Trucker Diablo have released a video for their song “Other Side of The City.”

The YouTube caption for the video states: “Trucker Diablo are back with a brand new single “Other Side of the City”. The single is taken from their forthcoming double album re-release “Devil Songs“, which comprises of the bands first 2 albums “The Devil Rhythm” and “Songs of Iron“. Plus newly recorded songs and demos from that era of the bands songwriting. “Other Side of the City” showcases the best music of Trucker‘s past and is a great accompaniment to two of their critically acclaimed albums.” 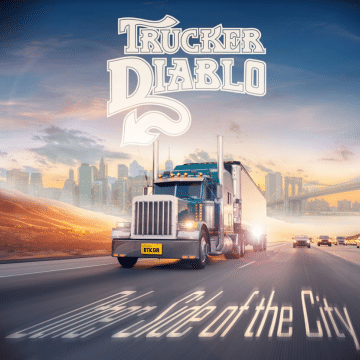 “After releasing first album “The Devil Rhythm” in 2010, Trucker gained a name for themselves picking up endorsements along the way from their peers such as Ricky Warwick, Ginger Wildheart, Joe Elliott, Damon Johnson and Cormac Neeson.

2011 saw the band be hand picked by festival promoters to appear at Download Festival and finish off the year supporting Black Stone Cherry on the sold out Irish leg of their UK tour. Leading right into 2012 the band has their single “Drink Beer, Destroy” feature on Kerrang TV, MTV Australia and Xbox game Rock Band 3.

Following on, the boys took 2012 by the throat and played a massive 40 shows, which including some key highlights from playing Hammerfest with Anthrax, supporting Foo Fighters at Tennents Vital, supporting Terrorvision on their UK tour, rocking crowds on the main stage at Hard Rock Hell festival and topping off 2012 by supporting their heroes “Thin Lizzy” in Belfast.

After the success of their debut album “The Devil Rhythm”, the band will release their highly anticipated second album “Songs of Iron”, which was released on 14th May 2013 through Ripple Music (USA) and Bad Reputation (EU). First single “The Rebel” was released 1st February 2013 and second single “Drive” was released at the start of April. Third Single “Maybe You’re The One” was released in September 2013 and the band recently got tipped as a new band to watch on the U.S nation rock show, That Metal Show.”

Trucker Diablo‘s “Other Side of The City” video:

Trucker Diablo – Other Side of the City (Radio Edit)

Trucker Diablo are back with a brand new single “Other Side of the City”. The single is taken from their forthcoming double album re-release “Devil Songs”, …