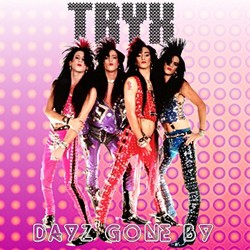 The one and only over-the-top Hollywood glam-pop kings Tryx is officially part of the Demon Doll Records family!

Demon Doll and guitarist/songwriter Roxy DeVeau have teamed up to smash open the glam and sleaze vaults once again. Demon Doll Records are very proud to announce that after 20 years of waiting, an official Tryx CD is now available. ‘Dayz Gone By’ is leather and laced with digitally remastered versions of the seven classic tracks that were released from 1987 to 1989 that helped make the band one of Hollywood’s biggest Sunset Strip attractions ever. Lock and load with “Cross My Heart”, “She’s So Fine”, “Sugar Sugar”, “Hold On”, “Don’t You Need It”, “You’ve Got A Lot To Learn About Love” and “Don’t Want To Know Your Name”.

There are also three bonus tracks on the disc that are raw, unmixed and unreleased. The three songs recorded in 1991 were never officially mixed or made available to the public — they may be a bit raw and unpolished, but the band wanted you to have the entire Tryx collection, so they are included for your enjoyment.

And if that weren’t enough — also included is the brand new video for “She’s So Fine” that catches the boys in all their glam glory! These guys just flat out kicked ass, took names and left the Strip yearning for more. They lived it, they loved it, and they were glam rock at its finest.

So sit back and get ready to go to glam heaven as the boys are giving you the 7 classics, 3 bonus tracks and a brand new video for “She’s So Fine” — all on one enhanced CD. These are the only 10 songs ever recorded by the band; there is no phantom EP or other songs from the band period. This is it, this is the true collection.

Grab your copies early and often as Demon Doll Records will open this album up for a 2 week introductory price of $12.99. Officially licensed from guitarist Roxy DeVeau, ‘Dayz Gone By’ can be purchased and previewed exclusively at demondollrecords.com/tryx.