Tuff singer and Metal Sludge principal Stevie Rachelle continues to share his story via a series of articles on Metal Sludge called the Tuff Diaries. In his tenth instalment, Rachelle again covers a lot of ground including plastering the Sunset Strip with flyers to promote Tuff.

The following is an excerpt from the tenth instalment of the Tuff Diaries:

“Speaking of friendship – there were also some enemies over the years.

Well, maybe not mortal enemies, but we had our fair share of beefs too.

This leads me to the Flyer War we had with the local band Taz.

Everyone has heard of how the bands would hand out flyers for their shows back in the 80’s.

But unless you were here, and walked the Sunset Strip on weekends, you don’t really know how epic it was.

The amount of colored paper that covered sidewalks and filled gutters was monumental. 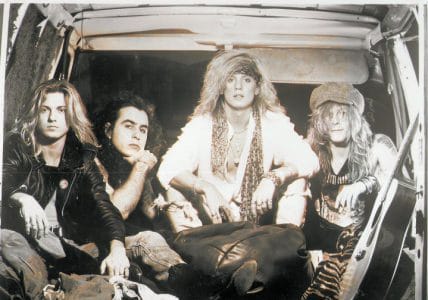 At the height of this, the city of West Hollywood had to hire a crew that would come to the heart of the scene (on weekend after hours) with brooms and a truck to clean the street.

Even if you lived close to the area and drove to work (in Hollywood) you saw the level of insanity that the flyering actually reached.

All or most bands handed out flyers on the weekends.

And that also included some weeknights at Cathouse (Tuesdays), Bordello on Thursdays and X-Poseur 54 on Sundays.

Add in a host of other clubs all over the grid.

Then there were some of us who flyer’d the telephone and light polls as well.

Along with every other standing flat surface we could glue our image onto.

Stoplight or streetlight poles needed to be coated with wall paper paste or glue.

Tuff used all methods and it wasn’t for free.

We would then buy a few 5-gallon buckets of the sticky stuff and paint brushes too.

Then we’d have our flyers for the show, and others with just our logo on 8.5 x 11 sheets of paper or even 11 x 17 mini poster size prints.

Here is how this worked… at least for us.

Then we would go back to the apartment, eat something and put on old clothes and map out a strategy.

Michael, “Stevie and I will start at Hollywood Bowl and go down Highland to Sunset. Then we’ll head West”

Talking to Todd and Jorge, “You two hit Vine Street by Capitol Records, La Brea by A&M Records and then head down to Melrose.”

We would start this after midnight and go until 3 or 4:00am.

Dressed in Oshkosh B’Gosh overalls and an old flannel shirt, I am ready to tackle tonight’s workload.

All of us are dressed in beater clothes as this paste, glue and the related will be everywhere.

In reality, this was I guess the band’s way of tagging our name.

Kind of like the gangs had been doing all over Los Angeles County for decades.

And yes, at some point cans of spray paint did come in to play as well.

So one night in 1989 we set out with a huge supply of gear to cover Hollywood in our band’s name – Tuff.

Michael and I are in his white Toyota pick-up and we start at the overpass (under the Cahuenga Bridge …locals will know what I am talking about) and head down Highland.

Under the Cahuenga over-pass, there is a wall, with dozens of flyers.

Everyone’s flyers are there, but not for long.

Michael and I spend 15 minutes or more, and put a flyer (coated in glue) over every single band flyer.

I recall there were a bunch of Taz flyers and New Haven too.

We covered all of them.

Now we pull away and stop by the Hollywood Bowl and like a garbage truck driver (Michael) and helper (me), we pull up and I jump out and assault each pole.

We don’t miss a one.

If it’s a wood telephone pole, the staple gun is loaded and ready.

If it’s a metal light pole, there is a 5-gallon bucket of glue in the back of the pick-up ready and a box of 5,000 flyers along-side it. .

Each stop takes a minute, or less. But there are a lot of poles on a city block.

Michael is smoking a Marlboro and directing the assault, “Hit those right there”.

I jump out and hit each pole with 3-4 flyers, sometimes 5.

But a few times a block, Michael jumps out as well and hits 1 pole while I hit a second.

Sometimes I run ahead of him with supplies and he has the flashers on slowly following.

And, acting as a lookout.

We never got busted, but did have a few close calls.

Sometimes he pulls right next to the curb, and I stand on top of his truck to paste or staple them higher up at 10, 12 or 15 feet off the ground.

The higher you go, the less likely they will be covered.

We’re now on Sunset Boulevard and headed West towards the clubs.

Posting away, and we’re hitting every pole in sight.

We’re not missing a pole and everyone is coated in neon colored Tuff flyers.

I have to admit, we’ve done this before and there is no better feeling then seeing every pole on every street corner covered with a big bright Tuff logo. 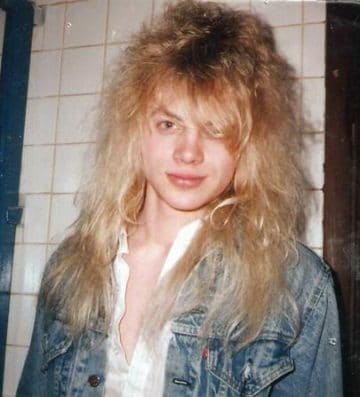 Remember, Hollywood is full of record labels too.

Geffen was on Sunset Blvd, so was Chrysalis and the BMG/RCA building too.

Then there was Capitol Records off Hollywood on Vine, and A&M on LaBrea just south of Sunset.

Aside from fans, and club goers – we wanted the entertainment industry to get use to and become familiar with our band name – Tuff.

Fun Fact: Many of our flyers were printed at a local Hollywood printer on Santa Monica Boulevard. The lady who owned the place was named Barbara, and she was super sweet to us. Her son Bruce use to do the same thing locally – until his band got a record deal. Bruce goes by the stage name C.C. DeVille.

So we are plastering the Strip with our paper faces for few hours.

We’re getting hungry so Michael pulls into a 7/11 and we grab a snack or two.

Back to work and now we’re passing Pink Dot and even the poles near Sunset Plaza Drive get hit.

It’s 3:00am and we’re finally at The Whisky, Roxy, The Rainbow and Gazzarri’s.

This is essentially, ground zero for the 80’s bands.

I used the trusty google search and it says Hollywood Bowl to The Rainbow is 4.1 miles.  (see insert screen capture)

Fingers are pinched from staple guns, pants are covered in paste and we’re a mess.

But we put in a few solid hours of work to make sure our name is seen by every car as they drive into work tomorrow morning.

We now double back and are driving east on Sunset Boulevard.

We’re anxious to get home, but all giddy to look at our work.

As we pass Coconut Teazer we’re looking at the poles, but our Tuff flyers are gone.

We look closer, and see that every pole we just hit, no longer has a Tuff logo on them.

We pull into the 76 Station across from Laugh Factory to take a closer look.

Michael pulls in and we park next to a van that is parked by the air and water hoses.

I don’t know why, but I looked towards the van and the occupants kind of slumped in their seats.

Maybe they were getting stoned, and didn’t want to be seen.

I jump out and run over to the corner and inspect the poles.

Our flyers are gone, or have just been covered – by Taz flyers.

Not some of, but every Tuff flyer we just put up – appears to be gone.

And where there wasn’t a Taz flyer, it appears someone had just ripped, torn or scraped off every Tuff flyer.

We jump back in Michael’s truck and start slow rolling back down Sunset.

EVERY SINGLE Tuff flyer is either covered or gone.

This is too crazy.

We’d make these flyers in multiple neon colors like pink, green, yellow or blue and post them everywhere. 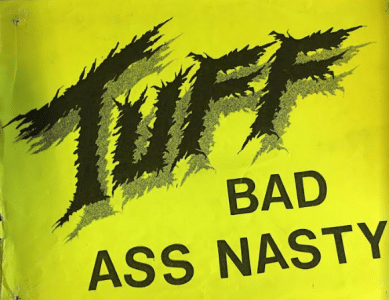 Michael pulls over on Sunset and so I jump out and start to peel off the Taz flyers.

Just as I am mid tear at the freshly posted Taz flyers, the van from the 76 Station suddenly pulls up behind us.

The van slams on its brakes and the doors fly open.

It’s KK (singer) and Kenny (drummer) from Taz along with a few roadie friends.

“What the fuck are you guys doing?” says KK.

I am pissed off, and so are they.

Now KK and I are face to face and screaming at each other.

We’re barking back and forth but no punches were thrown.

I can recall Michael once again, being the voice of reason and trying to calm everyone down.

But I was mad as hell and F-bombing like crazy.

After a very heated argument at 3:15am on Sunset Strip, it was over and we all went our separate ways.

We never had a beef or any bad blood with Taz.

No drama between us at all – but this night, it almost came to blows.

Over some flyers, Lol.

It appears that our covering their flyers – not some – but every one of them, touched a nerve.

And it seems they literally by chance were driving home themselves – from rehearsal and saw us in the act.

So they in turn, went home, got their gear and ultimately came back to the Strip and followed us.

And every block we hit, they hit as well – 10 minutes later.

As Michael and I drove home we rubbernecked back, and looked at all of the poles we just spent hours covering in Tuff flyers.

There was not 1 single Tuff flyer to be seen.

Instead…it was all Taz flyers.

This was what the Flyer Wars were.

Our 3+ hours of work and 4.1 miles of Tuff logo covered poles, only lasted about 15 minutes.

Ugh… amazing to think back though… but this was one of those events that was the 80’s.

My honest thought, is if there is a shortlist of bands who deserved a record deal – Taz was one of them.

A real solid band, who many locally compared to Kix.

Maybe at times, a little too much Kix. But I guess no different than our Tuff comparison to Poison.

Check out their 1989 Japanese release “Cold Shoulder” EP which has been reissued by Demon Doll Records.

A shout out and mad respect to KK, Ethan, Kenny and the others from Taz & crew.”