The “feud” between Tuff‘s long-time frontman and band leader Stevie Rachelle and current Bang Tango bassist Lance Eric continues as the former has denied ever calling the latter the derogatory terms “fat” or “fat fuk.” 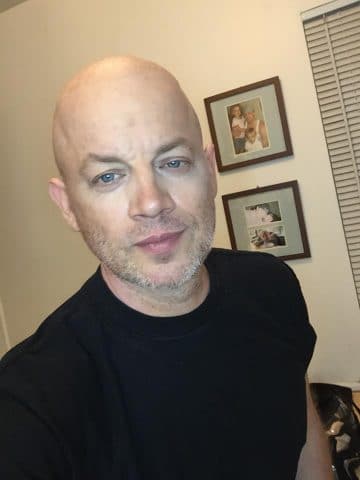 The issues between the duo started less than a week ago when Rachelle took exception to Eric‘s comment towards former original Bang Tango guitarist Mark Knight. Eric and Knight had been engaged in another “feud” spanning a couple of years due to Knight‘s attempts at reuniting the original Bang Tango line-up of himself, singer Joe Leste, guitarist Kyle Stevens, bassist Kyle Kyle and drummer Tigg Ketler back together even though Eric has been in the band since 2005 or so. Eric posted the following Facebook message last week:

Rachelle felt that Eric was disrespecting the guys that wrote the music that the bassist was playing in Bang Tango.

The duo has apparently been exchanging Facebook comments since then with Eric apparently suggesting that Rachelle has called him “fat” or “fat fuk.” In a lengthy article on Metal Sludge posted earlier today, Rachelle is denying that he ever called Eric by any of these terms and is challenging the bassist to come up with proof to substantiate it.

The following are excerpts from the Metal Sludge article (penned by Rachelle) posted earlier today:

“To be transparent, outside of a Facebook like, or a simple IM, with the exception of Joe LeSte, I have not had contact with any member of the original Bang Tango band in more than 25 years.

I defended them, simply because I felt they were being wronged and bullied by Lance Eric.

So, just being upfront here, noone asked or suggested I do any of what has transpired to date, between Lance and I.

This bullying from Lance towards Mark Knight in particular, has been going on for a few years now. I got sick of seeing it, and spoke out.

This enraged Lance who immediately went on the offense writing multiple posts, which included calling me a “Fucking pussy” and numerous insults. 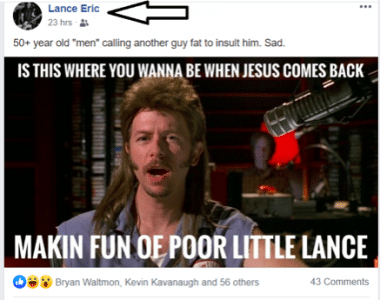 I replied again and shot down everything he said.

Lance once again, for whatever reason deleted all of my comments along with his own. But not before I screen captured all of it found HERE.

After Lance erased all of his bullying comments, I decided to write my article, RESPECT THE BRAND to speak out about his continued disrespect towards the band’s history and original members.”

“In my article, I never once insulted Lance, did not name-call him and simply suggested for him to respect the brand (musicians) who wrote the songs he was playing and helped build Bang Tango.

It appears that Lance was more embarassed than ever by my post and opted to make up a story to defend himself and ultimately fish for sympathy on Facebook.

He is leading people to believe that Metal Sludge, and myself have in fact called him these names, “Fat” and “Fatfuck”.

This has never happened, not once.” 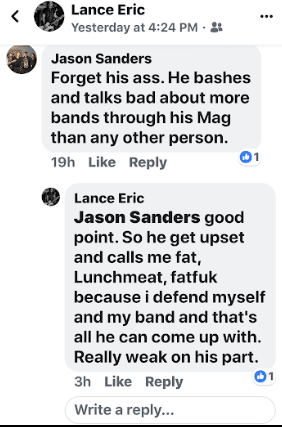 “Where is the proof that I called you Fat, or Fat Fuk?

It never happened, you’re a liar Lance, you did this to yourself.”

“I will own it to your face the same.

Sure I have talked some shit, we all do. But I can back mine up as well.

I do my homework Lance, clearly you do not.

I speak the truth.

You are a liar and a hypocrite.

You wrote lies about me and are looking for sympathy at my expense, not going to happen Lance.

I am relentless and will not go away, so you might want to acknowledge the fact, that I never said or wrote those things about you.

You wanna talk shit about me? No problem, I can hang. Talk all you want, but maybe learn to take it – if you’re dishing it out.

However, if you make up blantant lies, and put words in my mouth, that I never said or wrote, well then we have a problem.”

You can read the rest of the article penned by Rachelle at Metal Sludge‘s website.