Tuff singer and Metal Sludge principal Stevie Rachelle continues to share his story via a series of articles on Metal Sludge called the Tuff Diaries and is now on his sixth instalment. In his fifth instalment, Rachelle recalls what the band was told at one of its first ever live showcases back in 1988. 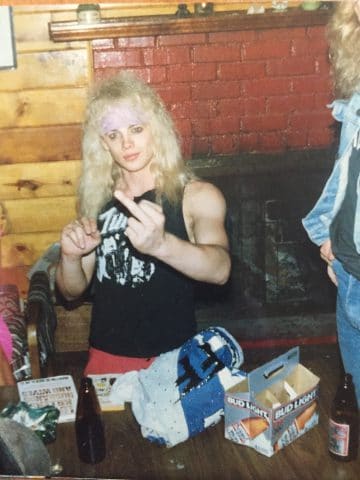 The following is an excerpt from the Tuff Diaries #5:

“Tuff has now done a half dozen or more shows, and written several new tunes.

It was time to do a demo.

Our manager and Michael started making some calls.

Jesse Harms was chosen to produce the band.

Jesse was the keyboard player in Sammy Hagar’s band. I don’t recall how that came about but he was a super cool guy to us.

The studio chosen, was Sound City in Van Nuys California.

I remember being told, “It’s an amazing studio, Tom Petty has recorded there, Fleetwood Mac and Foreigner.”

At least, not that much.

Had they told me “Too Fast For Love” was recorded there, I would have licked the floors.

Because that is what dumb 22 year old bleach blond rocker dudes thought like in 1988.

At least I did. Lol.

We rented the big room, and tracked on that big board. Yup, the same one that Dave Grohl bought and made that documentary about.

Jesse was great, and we recorded live takes with the full band. Then did overdubs of lead guitars, vocals, backgrounds and some keys.

The songs appear on a few Tuff CDs, along with the RLS Records release “Decadation” on 12″ vinyl….

In addition to this recording, we did a new photo shoot with William Hames and a press kit was made.

Michael put it all together. A totally professional package. The new demo, a bio and all on cool letter head with our logo.

I recall one of our first ever live show-case performances. As much info as I do have, some escapes me but I will try to give you the basics. 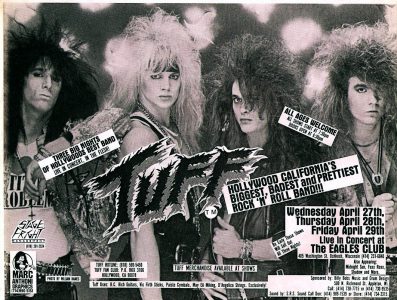 It was a bigger team of guys that came to see us. Like some record label’s A&R person, a producer and maybe 1 other industry dude.

We set it up at a reahearsal studio in the San Fernando Valley and they all showed up as planned.

Upon their arrival each guy was handed an envelope with our full press kit. An 8×10, the bio and a 52nd Street duplicated cassette tape.

Note: 52nd Street was the cool industry place that even labels like Capitol Records used for their advances.

I think we even gave them each a t-shirt as well….

Michael’s drum kit was airbrushed. It had all matching cymbals, front double bass drum heads with logos, the works.

Todd and Jorge, each had a roadie on stand-by, and multiple B.C. Rich tuned up axes ready to go.

The lights are dimmed, and we bust into songs.

Fifteen or twenty minutes later we end and they all give us a half-ass clap.

One of the guys says, “Wow, you have everything. Amps, drums, back drop, it looks like a real show.”

The other guy, “Yeah, this press kit looks awesome and merchandise too.”

We’re all standing there, beaming with pride and toweling off as we listen.

Then the third guy adds, “But you don’t have any songs. I don’t hear any hits.”

First guy and second guy join in, “Yeah. Guys it’s just not there.”

Of course Oshkosh is ready to debate.

“But did you hear “Summertime Goodbye””?

As I stand there with hair extensions rocking and more bracelets than a Barbie Doll.

Todd and Jorge don’t say much and Michael was the calm, voice of reason.

Instead of challenging their hearing, like I did… Michael says something like, “We’re open to working with some co-writers.”

To which one of the guys adds, “Yeah, you guys should get with a few writers, work on a few songs.”

Even though he was probably thinking, “Fuck You!”

But Michael was mature and handled all of this well.

Me, I am like, “How about “Sinner Street”, the girls love this song live.”

To which the guys are all probably thinking, “Can you get the singer guy to shut up?”

The showcase came and went, and I want to say by the end of it, it wasn’t the best.

I think we all kind of felt like they were being dicks, so… okay thanks for coming. And don’t let the door hit ya.”