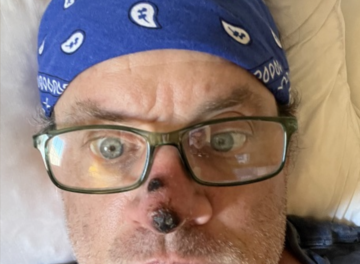 Tuff frontman and Metal Sludge principal Stevie Rachelle got an unpleasant surprise back in early August 2022. What initially looked like two tiny pimples on the 56 year old singer’s nose turned out to be a potentially deadly staph infection (also known as MRSA or Methicillin-Resistant Staphylococcus Aureus), which changed his facial appearance. Luckily for Rachelle, the staph infection was identified early on and the singer was able to get treatments to get rid of his unwanted and increasing “pimples” on his nose.

Rachelle reported in part as follows via his Metal Sludge website: 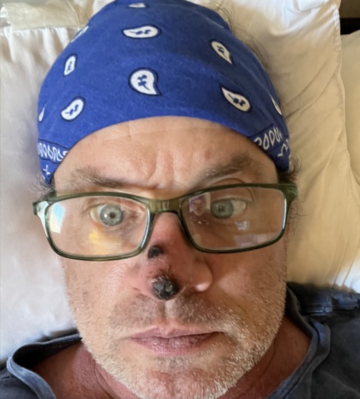 “So back in early August I woke up one Sunday morning with what appeared to be, 2 tiny pimples on my nose.

I didn’t think anything of it other than: “Why am I getting zits in my mid 50’s” and made my morning coffee.

As the day wore on, these 2 little zits, became more sore, red and noticeable.

By Monday they had worsened to a point where I was googling MonkeyPox as it was all the rage in the news for much of the summer.

Of course I am thinking: “What is this on my face” and “Do I have MonkeyPox“?

As each passing hour went by these sores became more concerning.

Roughly 48 hours later on Tuesday morning I woke up to realize it had worsened a lot over-night and I immediately called an Urgent Care.

Within a few hours I was in a Doctor’s office and upon seeing my face his words were: “Oh wow, you have a Staph Infection, this is very serious. We have to start treating this immediately.“

“Yup. You could end up in the hospital and in some cases people have died from this stuff” the Doctor informs me.

At this point I am completely dumbfounded and thinking: “How did this happen?”

The Doctor then asks me a bunch of questions, and of course I asked many more.

I mean this stuff came on so fast, it was almost like one of those crazy flesh eating bacteria stories that you see on the news where people have had to have a leg amputated or worse.”

“Over the next few weeks I was in and out of the Doctor’s office multiple times for various treatments, shots, and was prescribed a fist-full of antibiotics and related remedies.

I have also since been to my Dermatologist who was seriously shocked at the photos, and was wide-eyed in her reaction to my explaining the timeline and how fast this all unfolded.

Of course the biggest concern for me was that it wasn’t on my arm, shoulder, or leg… nope, right in the middle of my face.

It looked so bad, that for a period I was thinking “Am I going to lose my nose over this?” which I have now learned from these medical professionals was not out of the realms of possibility.

Good thing I went in as quickly as I did, or it may have been catastrophic to my appearance.”

You can read Rachelle‘s entire story and look at more photos via the Metal Sludge website.